Internet users are typically more engaged when accessing websites and social platforms that include photos and videos. Marketing firm Shift, for example, notes that readers are five times more likely to click an embedded link if a tweet includes an image. As a result, companies are now developing software solutions for sifting through the millions of online images in an effort to help brands, advertisers and e-commerce players identify what draws viewers. EyeEm Mobile and Neon Labs are among those looking to enhance the power of online visuals.

Such software could “help websites grab a bigger piece of the $149 billion annual trade in online advertising and $1.6 trillion in e-commerce,” suggests The Wall Street Journal.

Stephen Mayes, former creative director of the Getty Images photo archive, has tested the technology and suggests it “will reshape the visual industry.”

“Just as Google made the Web more useful by indexing online pages,” notes WSJ, “the new software promises to enhance the power of online imagery by indexing and prioritizing pictures that grab attention, he said.” 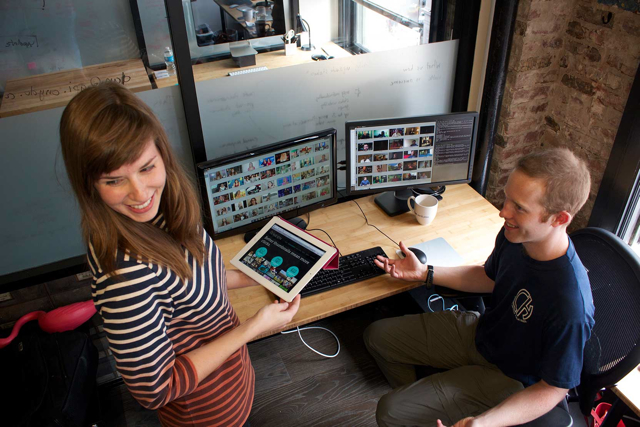 Software by Neon Labs also sifts through video clips for the most interesting frames. The company claims that its clients have generated 16-40 percent more revenue from their videos based on increased visual engagement and more clicks.

Neon Labs (team members pictured above) is updating its software so that it recognizes faces that appear online with great frequency, such as those of politicians and celebrities.

Analysts suggest that most publishers will likely use some form of algorithmic automation for curating their collections. And automation tools that learn how to identify beauty could offer compelling visual experiences.

“People say beauty is a subjective thing,” said Ramzi Rizk, EyeEm’s chief technology officer. “But a lot of it can be quantified.”