Since 2008, Sony has attempted to gain a foothold in the smartphone market, trying everything from a mobile gaming phone built on their PlayStation brand to enlisting James Bond to market the Xperia TL. The company’s latest offering in the flagship Xperia line, the Z, might not need 007’s help to take on Apple’s iPhone and make waves in the ever-growing sea of Android phones.

The phone was unveiled with a splash Monday as one of the focuses of Sony’s opening press event. The device is dust and water resistant and, while most hope to never test this feature, it is a nicety that beachgoers and bathtub-bound Web surfers alike will no doubt appreciate. Just as importantly, it’s a clever marketing point that drew crowds to its display booth to watch the phone get dunked before the press conference even kicked off. Something Sony’s marketing team will need to do more of to become relevant in a world dominated by Apple and Samsung.

Of course, the phone has more than just marketing ploys backing it up. The Xperia Z has a 5-inch, 1080p display that benefits from the inclusion of the Bravia 2 engine from Sony’s HDTVs and is powered by a 1.5Ghz quad-core Snapdragon S4 Pro processor. The device runs Android 4.1 Jelly Bean, has a slick, slim form factor with a back panel made from smooth glass and, unlike the iPhone, features expandable storage via a microSD slot. 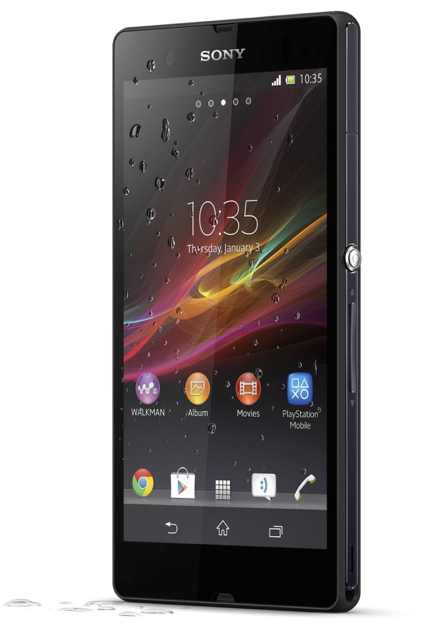 The real game-changer, however, is the phone’s 13-megapixel camera complete with Sony’s High Dynamic Range (HDR) imaging and video capture capabilities. The Xperia Z is the first smartphone to include this feature for video. The phone is packed with post-processing effects and options as well as several shooting modes like panorama and burst. Together these features give the Xperia Z one of, if not the, best cameras on a smartphone, filling a gap in the current market and besting the reigning king, the iPhone 5.

It will be released first quarter of this year, but no announcements have been made regarding pricing or carriers, although, it’s worth noting AT&T was the only carrier to offer the Xperia TL.

You can dunk Sony’s Xperia Z for yourself and check out their offerings by visiting the South Hall, booth #26731.