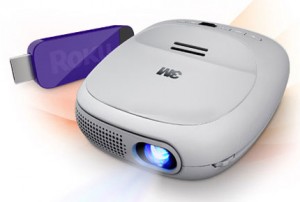 Additionally, Time Warner Cable announced during the show that it is bringing its TWC TV suite of streaming channels to Roku players, featuring up to 300 live television channels including ESPN and the Viacom lineup.

Smart TVs with the Roku Streaming Stick were displayed during CES at the stands of Apex, Coby, Haier, Hisense, and TCL. In addition, the 3M Streaming Projector with Roku was displayed.