Curtis Hickman, chief creative officer of The VOID and a professional magician, gave a keynote on “The Illusion of Reality” and how misdirection is key to a winning the VR experience. Misdirection is “that which directs the subject away from the method and toward the effect.” There are two types of misdirection: physical and psychological.

Physical misdirection is easy in VR because you control everything about the experience. For example, redirected walking allows The VOID to have its patrons think they are traveling great distances as they move within a relative small collection of rooms. Hickman summarized an episode of Discovery’s “MythBusters” that featured a blindfolded person in an open field who was instructed to walk in a straight line. He walked in a circle, “proving” that redirected walking works.

Psychological misdirection is accomplished by making use of fans, heaters, strings and other physical objects and 5D techniques that align with the VR experience.

For example, when someone lights a torch in a virtual fire pit in The VOID, a heater blows hot air. As people walk around with the torch, they report feeling heat from the flame even though there is nothing there, because the visual of the virtual flame maintains the psychological illusion of the misdirection. 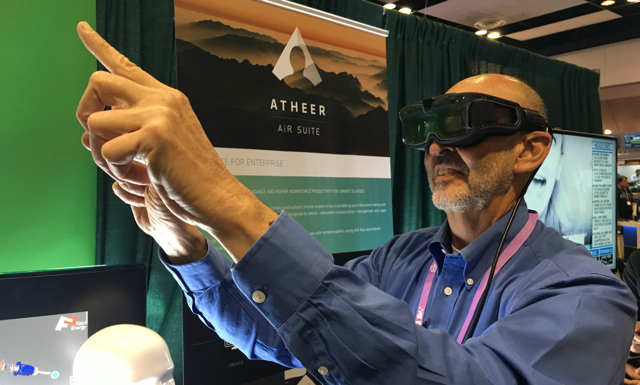 The challenge of VR isn’t to make the unbelievable seem real, Hickman said, it is to make the mundane seem real. When you walk from virtual indoors to virtual outdoors in The VOID, the temperature changes.

He loves to watch people’s reaction when he tells them to sit in a virtual chair. They approach the virtual chair, which is perfectly aligned with a real chair, cautiously. Then when they sit in the physical chair, their face lights up with joy. From sitting in a chair! The first time it happened Hickman knew he could hook people on The VOID experience.

“Because we make the normal real, people accept that the impossible is real too,” he said.

Most of the other AWE presentations were less dramatic, but equally informative.

Building on his recent TED Talk, Meta CEO Meron Gribetz said that he is working to replace the mouse with a way to control the world in an unmediated fashion. Using our hands transcends input devices. The Meta AR HMD has sub-millimeter hand tracking accuracy.

Gribetz stressed the importance of “touch to see.” Our visual system gets support from our sense of our body in space. Touching a virtual object and having an acknowledgement of that “touch,” such as haptic feedback, a noise or a flash, is more profound than image precision, he said.

Jared Finder described three core technical components of Google’s Project Tango; a platform that uses computer vision to give devices the ability to understand their position relative to the world around them. They are motion tracking with six degrees of freedom, depth perception, and area learning so the system recognizes and has a shareable memory of a space.

“VR takes you to a different world, and makes that world real,” explained Baobab Studios CEO Maureen Fan. Rendering two images every 11 milliseconds is hard at high quality and fidelity, she said. Image composition still matters. Storyboarding still matters. You can design story beats into VR. She suggests using audiovisual cues to direct audience attention, while being sure that what you are directing them to is obvious.

“Most of us don’t create, we assemble,” said Ebbe Altberg, CEO of the much-anticipated social VR world Project Sansar.

On the matter of women in tech; the National Science Foundation gathered statistics on the percentage of college women majoring in pre-med, pre-law, physical sciences, and computer science from 1965 to the present. All four follow an upward trajectory until the mid-1980s, when women in CS began a steep decline to the present day while the other three majors continued upward.

The mid-1980s was the period of transition from mainframes to desktop computing, when hardware and software knowledge left the corporation to become a “guy” thing. The development of VR is an opportunity to reset the landscape, as the growing number of women in VR and AR is illustrating.

On the exposition floor, two tech advances impressed me.

The newest model ODG AR glasses, developed in partnership with OTOY, deliver 2K per eye at up to 120 fps using an OLED/curved mirror assembly.

That resolution might sound low, but the image from a 72K resolution source file looked incredibly clear with no screen door effect. The image was bright enough to nearly fully occlude the view of the brightly lit room behind the sunglass-style HMD glass.

The glasses do not have built-in headphones. There is a socket for third party earbuds.

The other impressive tech was the greatly improved waveguide AR displays demoed by Epson and Lumus. The new Epson Moverio BT300 has a tiny 23-degree field of view, but the display is very bright and occludes the background. It has a forward-looking camera and sensors for hand-tracking and gesture control.

The Lumus DK-50 has a 4o-degree field of view and an equally bright display. Lumus would rather license the display assembly than make HMDs themselves, the rep said.

VR/AR industry pioneer and educator Mark Billinghurst splits his time between teaching at the University of South Australia and building Envisage AR, a New Zealand-based company committed to delivering AR tools for education and commercial applications. At AWE 2016 he unveiled Phonevers PI, a $1,000 AR HMD hardware and software solution developed in partnership with Chinese manufacturer Phonevers. The device will be ready for delivery at the end of the year.

AWE brought together an international community of established companies, startups, researchers, marketers, VCs and academics working on all aspects of the rapidly evolving VR and AR ecosystem. With five simultaneous session tracks covering storytelling, technology and product developments, developer concerns and standards, enterprise solutions, business models and market research, and other topics related to AR and VR, it was an intense two days.