Autodesk and Google Cloud Platform Bring Maya to the Cloud

According to Prives, individual accounts with ZYNC can access up to 500 64-core machines, totaling 32,000 cores, an amount “far beyond the typical scale of small to mid-sized facilities and freelancers.” Currently, renderers supported on ZYNC include VRay and Arnold, with support for Pixar’s Renderman announced at NAB 2016. ZYNC is also debuting 24-hour support during the weekday. 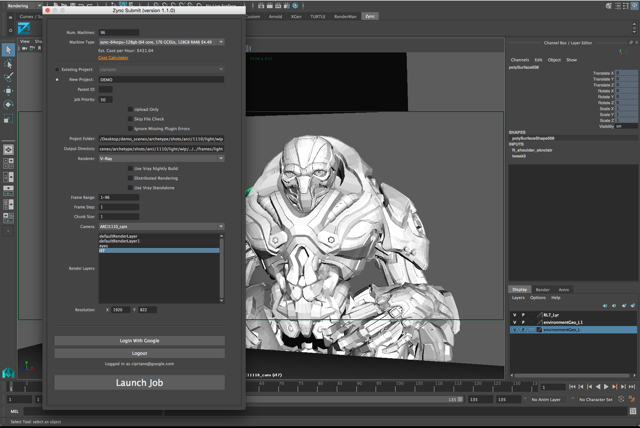 The new Autodesk Maya cloud rendering service for Google Cloud Platform ZYNC Render is available to Maya users now, with pricing starting at $0.60 per hour. “Maya customers can now scale productions quickly and efficiently while also adding rendering capacity — without additional hardware,” said Autodesk senior vice president Chris Bradshaw. “And Maya is only the beginning as our teams continue to explore how we might expand this functionality to other M&E products as well.”

Prives says he expects some of the initial users to be the smaller to mid-sized studios and freelancers that don’t have the resources to invest in infrastructure. “But we also have quite large studios using Google Cloud Platform, including [big VFX facilities] MPC and Framestore, that build their own custom solutions on top of our cloud platform. They use our compute, storage and networking, but it’s a separate implementation that their own pipeline directors have set up compared to ZYNC’s turnkey solution.”

For the smaller facilities, being able to turn on and off 500 64-core machines as needed provides an ability to scale up hitherto unavailable. “They’ll actually be able to now run Maya on the cloud and translate that scene to the renderer to improve the efficiency of the entire workflow,” said Prives. “We’re building this up as a tool for mission critical times, and we’re expecting fairly large uptake of the platform.”