Audi Connects with Future of Mobility in CES Keynote Address

The Audi of the future is more than mere transportation. In a CES keynote presentation, Professor Rupert Stadler, chairman of the board of management of Audi AG, demonstrated how the “connected car” is redefining today’s automobile with an array of innovations that include piloted driving and “a new dimension of in-car entertainment.” Audi cleverly cast Kunal Nayyar of “The Big Bang Theory” to introduce and host the tech-heavy presentation.

“We are moving from refining the automobile,” said Prof. Stadler, who arrived on stage in a pristine vintage chauffeur-driven 1930 Horch 850, “to redefining mobility.” 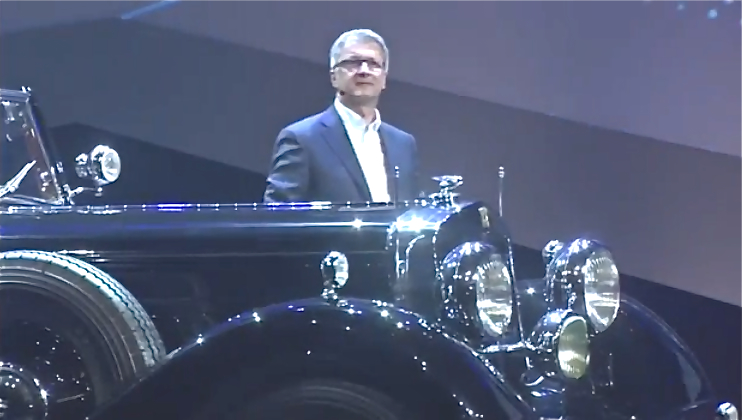 Less than a year since the announcement of “piloted driving,” the zFas system of driver assistance has gone from a trunk filled with technology to a production-sized circuit board. Audi expects to have its assisted systems installed in production cars this year and “piloted driving” to be available before the end of this decade.

“No matter who we ask, no matter where they live, people want to be connected,” he continued. “So if mobility used to be about connecting places and people, it is now about connecting the driver with the car, the car’s surroundings, the traffic infrastructure, and all of the other connected elements of their life.”

Audi will be the first carmaker worldwide to seamlessly integrate Android devices into its vehicles, the company said in its press release.

NVIDIA Co-Founder, President and CEO Jen-Hsun Huang came onstage to talk about the latest evolution of the NVIDIA Tegra processor that enables the carmaker’s Modular Infotainment Platform (MIB). The updated MIB with the NVIDIA Tegra 30 processor will go into series production with the new Audi TT.

The computing and graphics power of the NVIDIA Tegra 30 enables a whole new generation of instrument cluster with unprecedented performance and precision.

In another first for carmakers, Audi is presenting a new dimension of in-car entertainment: the Audi Smart Display. This represents the perfect combination of the latest technology from the consumer sphere with the robustness and reliability of the automotive sphere in a tablet suitable for use in the car. It has a 10.2-inch, full HD display and a brushed aluminum case. A WLAN interface connects it to the car. The heart of the Smart Display is the computing and graphics power of the NVIDIA Tegra 40.

The Audi Smart Display connects the car to the consumer world and vice-versa. Passengers in the front or rear seats can use the touchscreen to control the car’s radio, media, navigation and other convenience functions.

The integrated WLAN hotspot allows the car’s passengers to connect as many as eight personal mobile devices. To go online, drivers merely need to insert a data-capable SIM card into the MMI navigation plus unit’s card reader to go online. Alternatively, they can connect their cell phone to the system via Bluetooth if it is equipped with the necessary SIM Access Profile. Operation is via MMI navigation plus, the multifunction steering wheel or voice control. To provide optimal reception conditions, voice and data signals are transmitted via the car’s roof-mounted antenna.

For the entertainment industry, especially with the prospect of piloted driving in the not too distant future, the connected car suggests the expansion of truly mobile entertainment. 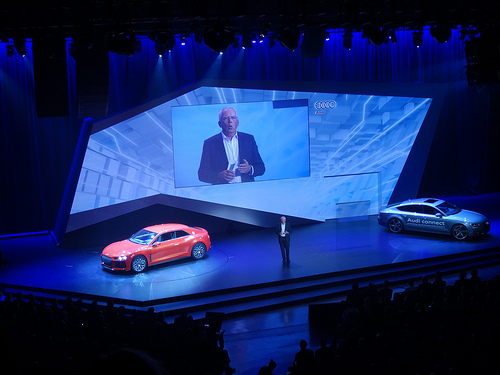 After an electrifying performance by a laser-clad dance troupe, Audi CTO Ulrich Hackenberg (above) displayed Audi’s newest concept car, the Sport Quattro Laserlight, that drove itself onstage. Hackenberg emphasized the need for the automotive industry and Silicon Valley to develop a closer working relationship. He noted the formation of the Open Automotive Alliance, announced earlier in the day, bringing together Audi, GM, Google, Honda, Hyundai and NVIDIA as founding members in a new industry alliance aimed at bringing the Android platform to the car.

According to the Alliance’s press release, “the OAA is dedicated to a common platform that will drive innovation, and make technology in the car safer and more intuitive for everyone.”

Video of the keynote is available online.