Google’s super-fast broadband service, Google Fiber, has only debuted in four cities serving fewer than 100,000 people. But its very existence spurred Comcast and AT&T to up their game, offering the same 1-gigabit Internet speed. Now, the leader, AT&T, offers its GigaPower service in 20 urban areas, and Comcast, which tested cable-based gigabit in Atlanta, has plans to roll it out in Nashville, Chicago, Detroit and Miami later this year. That probably suits Google just fine, since its end game is to sell ads requiring that speed.

According to Bloomberg, Recon Analytics analyst Roger Entner reports that, with AT&T, the nation’s carriers now have as many as 1 million gigabit users. “There’s a lot more bark than bite,” behind Google’s strategy, he notes. Google first announced it would lay a fiber network to compete with cablecasters and telecoms six years ago. 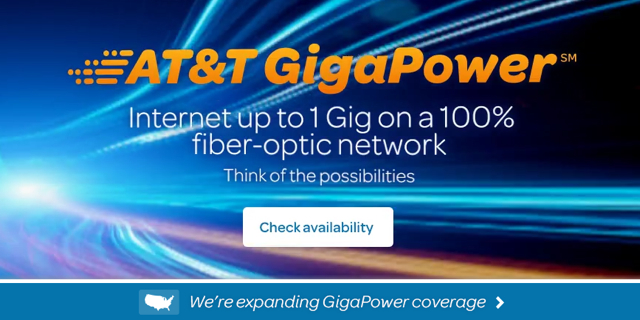 With 1-gigabit speed, users can stream (without buffering) an entire movie in less than two minutes or “at least five high-definition videos simultaneously while also having enough bandwidth to e-mail and surf the Web.” AT&T is expanding its gigabit service to 36 more cities, and FairPoint Communications and Windstream Holdings are also entering markets. Comcast already markets a 2-gigabit service.

“Any time Google is doing three, AT&T is doing 30 cities,” said Entner. Although Google — whose parent Alphabet spent almost $280 million on the fiber venture in Q1 2016 — offers consumers a $20-a-month drop in prices on average, many consumers aren’t swayed, staying with their existing Internet providers even when speeds are slower.

In Provo, Utah, Google rolled out its fiber service in 2014, and many consumers, threatening to switch over, got their existing providers to lower prices, said the city’s chief administrative officer Wayne Parker.

Google, whose 1-gigabit service costs $70 a month, added phone service that can be bundled with broadband and TV. That compares with Comcast, which offers a lower-speed Internet access and more than 80 TV channels for $80 or more. Google has experimented using a local utility’s fiber infrastructure instead of building its own, but the company declined to say whether it would consider buying a cable or telecom company “to speed up the Fiber rollout.”

The company also has not revealed its subscriber numbers, and, though it plans to expand to seven more cities, has yet to provide a timeline.