Augmented and virtual reality have been evolving, but aren’t yet at the point of breaking into the mainstream. Now, a grassroots group of individuals and organizations is working to create the first worldwide Virtual Reality Day, on November 18, an event it hopes to make annual until AR and VR reach wide acceptance. The group has chosen the date as the last Saturday before Black Friday, with the hope that parents and children will explore AR/VR together. The New York VR meetup (NYVR) — with 5,300 members, the second largest in the world — will participate.

Forbes reports that Dj Smith, co-founder of VR/AR company The Glimpse Group and organizer of NYVR is excited about participating. “NYVR’s mission from the beginning has been to support the growth of the VR community and events like Virtual Reality Day are a critical component in bringing the community together and advancing the technology,” he said. 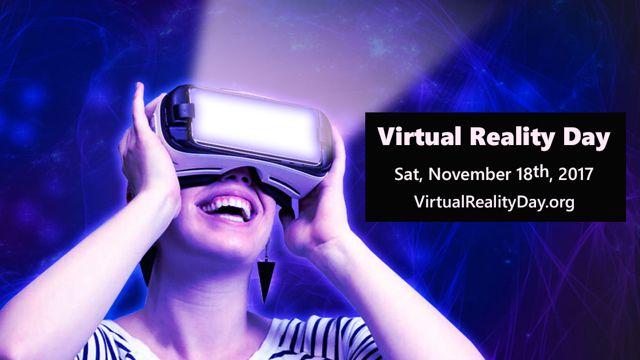 More than 20 organizations, individuals and colleges around the world, “have expressed interest in organizing an event and taking part.” Washington DC, New York City and Annapolis, Maryland have already confirmed events, and Toronto, Boston, Phoenix, Austin and San Francisco are “in the final stages of preparation.”

“Virtual Reality Day may well be the catalyst the industry needs to unify the market and realize the commerce potential in the VR industry,” said Humaneyes Technologies general manager Jim Malcolm. “Significant advancements in computer programming, VR video capture, distribution platforms and headset capabilities combine to unify a once fragmented industry. Virtual Reality Day will demonstrate the significant progress the industry has made.”

Humaneyes and HTC have donated hardware, valued at over $1,500, which will “be raffled in a global online giveaway in an effort to support the Virtual Reality Day movement, and bring further awareness to the event.” One of the largest U.S. arcades, VR World NYC is also “offering a downloadable coupon through the Virtual Reality Day website allowing the first thirty customers to save 50 percent off their VR gaming experience this Saturday.”