Apple and MLB Team Up for Interactive Ballpark Experience

Major League Baseball is launching a new initiative involving customized features for its At the Ballpark app that will make attending games a more interactive experience for sports fans. The app will use Apple’s iBeacon indoor mapping, a new feature of the company’s recently released iOS 7, for a customized stadium experience. Apple’s mapping tool addresses the limitations of using GPS indoors. MLB and Apple have been working on the project since February. 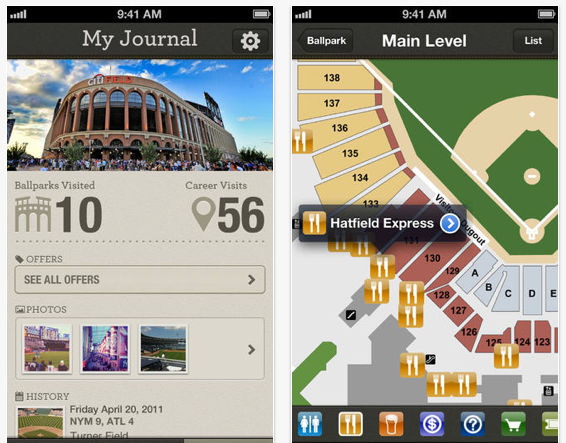 “We’ve been looking at customizing the app based on where you are within the stadium, but GPS is notorious for not working indoors, especially when you are in a building made of steel,” explains Marc Abramson, iOS developer for MLB. “Instead, we are incorporating Apple’s new Bluetooth and iBeacon technologies for iOS 7 and couldn’t be more excited about the potential.”

“Essentially, we want to create micro-locations within the stadiums where you can get different experiences,” Abramson said.

“By loading the free app when you get off the subway and head towards the stadium, it immediately knows you are at Citi Field,” reports Mashable. “It populates a ballpark guide with information specific to the stadium, so if you were to enter Phillies’ Citizens Bank Park, the entire experience and data wouldn’t be the same.”

The app will display the ticket barcode and a map of seat locations. “If tickets are loaded into Apple Passbook or purchased online through certain ticketing partners, the app will automatically pull them up,” notes the post.

“In addition, the app can be programmed to highlight points of interest that can be unlocked. In the Mets’ case — at least in terms of the demo — it began playing a video about the history of the stadium while standing near the Mets’ iconic apple statue.”

“The whole concept is to give the user an individualized experience that is always different,” according to Abramson. “The next time a fan comes to Citi Field, you might not get a prompt to visit the apple because it knows you’ve been there. Instead, it will highlight another area of the stadium.”

Fans who attend multiple games can be rewarded with coupons, free food items or discounts at the team store. While the New York Mets are testing the technology, MLB did not indicate what other teams have expressed interest.