Amazon and Microsoft gave a public demonstration of the integration of Alexa and Cortana into all Echo speakers and to all Windows 10 users. That means that a user can ask Windows 10’s Cortana to open Alexa, and ask Alexa on Echo speakers to open Cortana. This integration is now available to most users but will completely roll out around the country over the next week, said a Microsoft spokesperson. Some features, such as streaming music, audiobooks and news flashes will not be available at launch.

VentureBeat reports that each AI assistant has its strengths: “Cortana, for example, can schedule a meeting with Outlook, create location-based reminders, or draw on LinkedIn to tell you about people in your next meeting, and Alexa has more than 40,000 voice apps or skills made to tackle a broad range of use cases.” 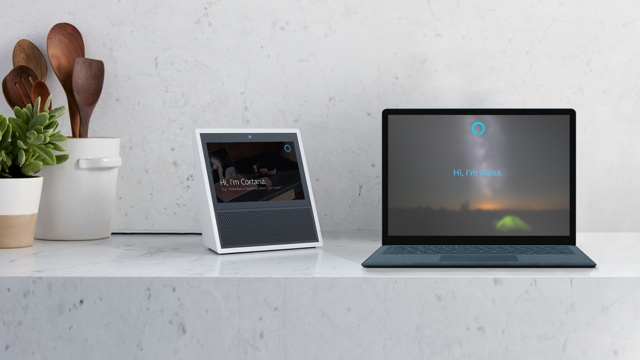 Features they both possess include reminders, timers and adding events to the user’s calendar. Microsoft chief executive Satya Nadella and Amazon chief executive Jeff Bezos first announced this partnership a year ago, and first demonstrated it at the Build developer conference in May.

“The world is big and so multifaceted,” said Bezos last August. “There are going to be multiple successful intelligent agents, each with access to different sets of data and with different specialized skill areas. Together, their strengths will complement each other and provide customers with a richer and even more helpful experience.”

Cortana, which has more than 140 million monthly active users almost entirely on Windows 10 PCs, will offer Alexa on the Harman Kardon Invoke smart speakers. Amazon will offer Cortana on the Echo, Echo Dot, Echo Spot, Echo Plus, and Echo Show. Amazon hasn’t disclosed the number of Echo speakers sold, and sales of the Harman Kardon speaker has been “underwhelming and … yet to gain widespread adoption,” says VB.

At Microsoft, Javier Soltero is product lead for Cortana and vice president Andrew Shuman heads engineering. A source told The Wall Street Journal that he expects Soltero “to provide more details regarding his Cortana strategy early this fall.” In a conversation with VB, Soltero “denied that an integration with Alexa has led to a stifling of Cortana Skills Kit adoption among developers … [and] expressed a desire for Cortana to expand beyond an emphasis on productivity and the workplace.”

“We are steering the product experience toward delivering value in each of the three states that people are in, which is, in very generic terms, at work, at home, or somewhere in between — at least for our target user — and really honing in on what can [Cortana] do for that user in that setting that is assistive,” he said.