New software called Kinematics, developed by design studio Nervous System, has successfully been used to create 3D-printed dresses that fit, move and sway like dresses made of traditional fabrics. Unlike existing 3D-printed garments, Nervous System’s dresses use material that adapts to body movements so its fits and feels like a normal dress. While the current cost of each dress is about $3,000, Nervous System hopes to reduce that amount to make it more appealing to the general public.

“Instead of pinning fabric to a dress form, a Kinematics garment starts as a 3D model in a CAD program,” explains Wired. “Kinematics breaks the model down into tessellated, triangular segments of varying sizes. Designers can control the size, placement, and quantity of the triangles in a Javascript-based design tool and preview how the changes will impact the polygonal pinafore.” 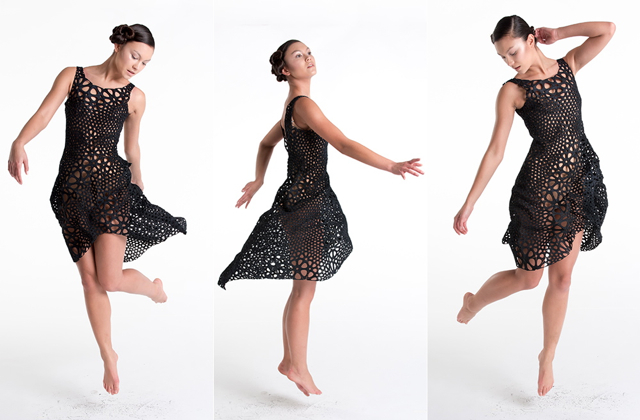 “Once the designer is satisfied, algorithms add hinges to the triangles uniting the garment into a single piece and compress the design into the smallest possible shape to optimize the printing process, often reducing the volume by 85 percent.”

The printing process takes about two days after which the dress is removed from the printer to be cleaned and dyed. Nervous System’s current dresses are made in black and white.

According to Rosenkrantz (who is also the founder of Nervous System), all dress adjustments were carefully addressed prior to printing. “We knew not only exactly what the final piece would look like but also how it would behave,” she said.

“Next up for Nervous System is improving the speed and adding new mechanisms and structures that will allow simulating different materials — think of a stout tweed versus a gossamer silk,” reports Wired.