In 2016, virtual reality will go on a roller coaster ride at several theme parks. Plans for nine VR roller coasters are already slated, with haunted mazes and thrill rides in the planning stages. At the Wonderland amusement park, outside Toronto, Canada, the Thunder Run roller coaster will begin to offer virtual reality headsets, for an added fee, to a limited number of riders. During the off-season, the park tested the VR experience, where riders fly on the back of a fire-breathing dragon over a medieval village.

The Los Angeles Times reports that the Cedar Fair amusement park chain will also add VR to another roller coaster at one of its 11 locations.

“It’ll be a different type of coaster because we want to see about the different types of physics,” says chief executive Matt Ouimet, who envisions “riders being able to buy a package of VR coaster rides with multiple story lines.” 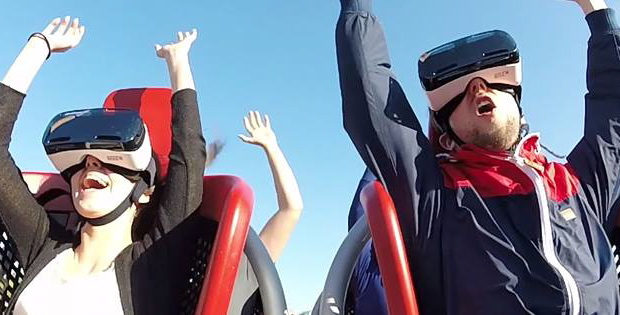 The VR experience on the second coaster, which will feature a different story, will begin test runs soon. Ouimet, who says that VR is being used to improve ridership on coasters not operating at full capacity, also has plans for a VR haunted maze that can adjust from “extremely gory to family-friendly.”

To build-out the upgrades, Cedar Fair has partnered with Mack Rides, which works with virtual reality design/engineering company VR Coasters. Mack, which plans to add VR to nine coasters in 2016, tested VR technology on the Alpenexpress mine train coaster at Germany’s Europa Park.

Although the 360-degree 3D VR experience synchronizes with the coaster’s motions — including steep drops and G-forces — so far riders haven’t experienced motion sickness. Mack Rides and VR Coasters are also working on two new VR coasters to open in 2017 and 2018.