Google-owned Nest, maker of smart thermostats and smoke alarms, was one of seven companies that announced a new consortium yesterday called the Thread Group, which plans to promote the online connection of devices through a new IP-based, wireless networking protocol called Thread. Chris Boross, president of the consortium and head of technical marketing at Nest, said the group is looking at “250 products per home network” in order to “provide ample room for growth in the future.” 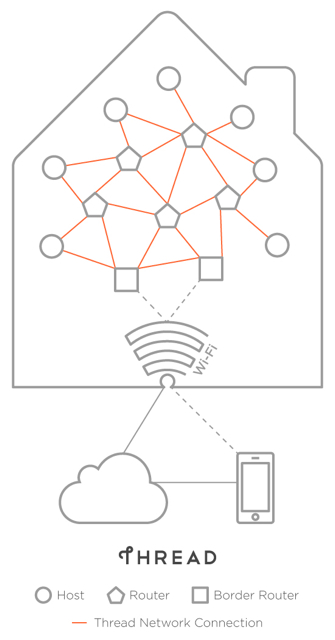 The news follows the recent formation of two other groups interested in creating standards for the Internet of Things. We recently reported that the AllSeen Alliance (backed by Qualcomm, Microsoft and 50 others) and the Open Interconnect Consortium (backed by tech companies including Intel, Broadcom, Dell and Samsung) both plan to develop standards for wirelessly connecting devices to each other and the Internet.

However, the Thread Group is proposing a wireless “mesh” network in which devices communicate with each other similarly to how they interact with a home Wi-Fi router.

“This makes Thread different from recently announced efforts by an Intel-led group, and another one featuring technology from Qualcomm, for a standard between routers and devices,” reports The New York Times. “Thread is more likely a way to connect everything, then have all those household products reach the Internet via the Intel or Qualcomm communications standard or some other standard.”

“While currently available 802.15.4 networking technologies have their own advantages, each also has critical issues that prevent the promise of the Internet of Things from being realized,” according to the press release. “These include lack of interoperability, inability to carry IPv6 communications, high power requirements that drain batteries quickly, and ‘hub and spoke’ models dependent on one device (if that device fails, the whole network goes down).”

“With Thread, product developers and consumers can easily and securely connect more than 250 devices into a low-power, wireless mesh network that also includes direct Internet and cloud access for every device,” adds the release.

Thread is a networking protocol built on open standards and is already being used in current Nest products. It claims to offer product developers certain advantages over existing wireless standards, including reliable and secure networks, simple connectivity and low power.

In addition, the group says that millions of currently available wireless devices can run Thread with a simple software enhancement.

“Existing wireless networking approaches were introduced long before the Internet of Things gained ground,” said Vint Cerf, vice president and chief Internet evangelist, Google, and advisor to the Thread Group. “The Thread protocol takes existing technologies and combines the best parts of each to provide a better way to connect products in the home.”