While touchscreen devices have keyboards integrated directly onto their screens, many people miss the tactile feel of a traditional keyboard. Tactus Technologies, a company we first reported on during CES 2013, has developed shape-shifting touchscreen buttons to meet the needs of these consumers. The tech is coming to market later this year with an iPad accessory that will feature transparent morphing buttons that use small fluid-filled channels and elastic blisters to make the buttons rise during use. 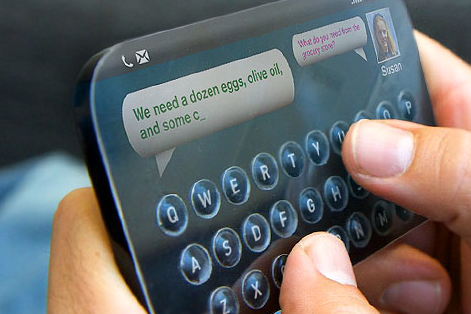 “Tactus brings real physical buttons that dynamically appear and disappear into a flat touchscreen,” explains the Tactus homepage (which also includes links to video demos). “Never again will you have to choose between thin stylish devices with edge-to-edge touchscreens and amazing usability. Mobile can truly mean productivity, immersive gaming, and adaptive interfaces with Tactus.”

Manufacturing giant Wistron — which has made devices for brands such as Acer, Apple and BlackBerry — is now an an investor in Tactus, and has modified one of its production factories in China to mass-produce panels with the shape-shifting technology.

“The first fruit of the tie-up will go on sale later this year in the form of a protective case with Tactus technology inside for Apple’s iPad Mini,” reports MIT Technology Review. “The design includes a transparent screen protector that covers the front of the device. However, sliding a mechanical control on the side of the case raises up a transparent set of buttons or guides on the screen protector, over the touch keyboard, to make typing easier. Sliding the control back will cause those buttons to melt away, leaving a clear, smooth pane of glass.”

Technology Review test drove a prototype and seemed impressed with the experience, particularly noting that physical feedback helped “fingers learn how to hit their targets better.”

The new relationship with Wistron could lead to morphing buttons appearing on more devices. “We are only at the beginning of what we expect to be a multiyear partnership, where the Tactus solution will be brought to multiple markets, starting with mobile computing,” said Tactus CEO Craig Ciesla.