Successful YouTube Show May Serve as Model for Web Series

The Web series “Video Game High School” (“VGHS”) premiered on YouTube in May of 2012 and became a meteoric success. The series subsequently earned sponsorships from Sony and Monster Energy Drinks, and is now available on Netflix. Season Two of the critically-acclaimed series, currently in production, raised more than $808,000 on Kickstarter and could end up becoming the model for future online series.

“A teen drama mixed with first-person shooters may not appeal to everyone, but ‘VGHS’ has undeniably set the bar for online production design,” reports Wired. “The series is widely held up by YouTube professionals as the new ‘design’ gold standard.”

The show comes from Rocket Jump Studios and co-creator Freddie Wong, a semi-pro gamer who currently has the eighth most popular YouTube channel. His team has created an entire new world for the “VGHS” characters to inhabit that includes costumes, props, a faux school seal, game-themed effects, and enormous sets inside YouTube Space LA. 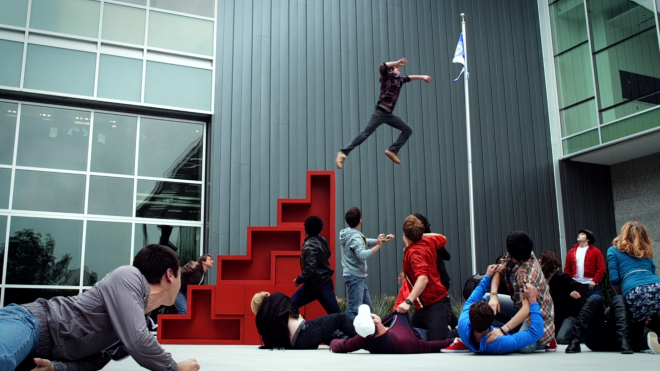 Wired interviewed Wong about the challenges and opportunities involved with a series designed for a small screen.

“A lot of the challenge comes from making absolutely sure you’re getting the most bang for your buck as possible,” he explains. “For Season Two, we’re working closely with YouTube to shoot at their new stage spaces in Los Angeles. Shooting on location and dressing locations in Los Angeles is shockingly expensive, especially when you’re talking about webseries-level budgets, so the opportunity to build our sets in YouTube’s space gives us a lot more room in our budget in being able to create the world of ‘VGHS’ properly.”

“Season One was all about us figuring out what this universe looks like and doing the legwork to establish all that,” Wong says when discussing the differences between the two seasons. “With that out of the way, we’re focusing much more heavily on characters and sideplots. We’re changing our format around too — we’re shooting six TV-length 20-25 minute episodes, which allows us to get in all the side characters and B and C plots that we were simply unable to do in Season One with a 10-minute episode structure.”

“Thanks to Netflix and Hulu, people are getting more and more used to consuming longer stretches of content on their televisions or computer screens. This starts to open the door for us to do, as we are in Season Two, longer episodes — something that would’ve been unheard of just a couple years ago,” he notes, in regards to the direction of online video. “As Web video and independent production grows online, we’re hoping to be at the front of that development and hopefully influence the shape that it will take.”

The Wired post includes a video trailer for the series. For more information, visit Rocket Jump Studios or the show’s Kickstarter page.