‘Star Wars’ VR Experience to Open at Disneyland by Holidays

This holiday season, Disneyland Resorts in Anaheim and Orlando will debut “Star Wars: Secrets of the Empire,” a multi-player virtual reality experience based on “Star Wars,” and produced by VR start-up The VOID, Lucasfilm and ILMxLAB, Lucasfilm’s immersive entertainment division. Prior to this production, ILMxLAB built “Trials on Tatooine,” which was available to consumers on VR headsets and in IMAX VR centers. The VOID calls its experiences “hyper-reality,” as the participant can explore, pick up props and open doors.

“At ILMxLAB, we want people to step inside the worlds of our stories,” explained ILMxLAB executive-in-charge Vicki Dobbs Beck. “Through our collaboration with The VOID, we can make this happen as guests become active participants in an unfolding ‘Star Wars’ adventure.” 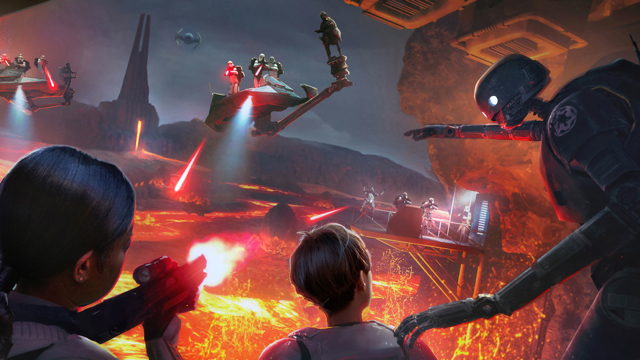 The VOID’s first “hyper-real” experience was “Ghostbusters: Dimension,” which played at Madame Tussauds in New York City’s Times Square and is now also at locations in Toronto, Dubai and its corporate headquarters in Lindon, Utah, according to Variety. Chief executive Cliff Plumer has said that, “his company eventually wants to operate experiences on thousands of stages around the world.”

According to TechCrunch, “the strategic partnership with Disney and The VOID isn’t a huge surprise,” since “last month, the startup announced that it was in the current batch of the 2017 Disney Accelerator.” Being in two Disney Resorts, it adds, “has to be the Holy Grail for a location-based VR startup,” since The VOID doesn’t want to rely “on the renaissance of arcades or convincing movie theaters to convert free space.”

The VOID’s own blog describes how guests will be able to “move freely throughout the untethered, social, and multi-sensory ‘Star Wars: Secrets of the Empire’ experience in a way that allows them to interact and engage with friends, family and ‘Star Wars’ characters.”

“A truly transformative experience is so much more than what you see with your eyes; it’s what you hear, feel, touch, and even smell,” said The VOID co-founder/chief creative officer Curtis Hickman.

“By combining Lucasfilm’s storytelling expertise with cutting-edge imagery, and immersive sound from the team at Skywalker Sound, while invoking all the senses, we hope to truly transport all those who experience ‘Star Wars: Secrets of the Empire’ to a galaxy far, far away,” said Beck.