Pixar vets Oren Jacob and Martin Reddy launched San Francisco-based ToyTalk, a startup that develops mobile games that enable children to have extended conversations with animated characters. The concept was inspired by a Skype call when Jacob’s then 7-year-old daughter asked if she could speak with one of her dolls. While kids can hear characters speak through movies, games and toys, Jacob began thinking about how to help children better engage with the characters. 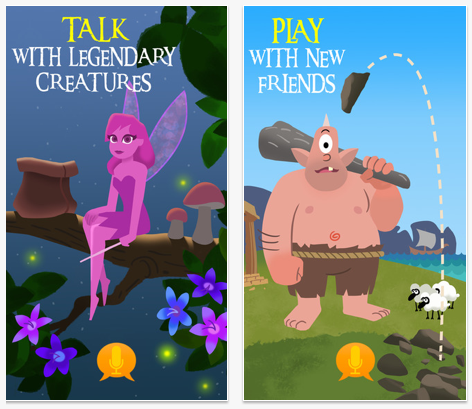 “Since last year, when ToyTalk rolled out the well-reviewed ‘Winston Show’ — the first app to engage kids in conversation with characters — the company has amassed more than 20 million recordings of kids on which to build its speech-recognition platform,” reports Businessweek. “All conversational snippets are collected only after receiving parental permission. Parents can even play back what their child says to the characters and submit highlights for consideration in the editor’s picks section of ToyTalk’s website.”

ToyTalk’s latest game, “SpeakaLegend,” launched this week in the App Store on iTunes. It allows kids to chat with mythical creatures such as dragons and unicorns.

“These apps are rather clever in their own right, but what could potentially turn ToyTalk into a Pixar-like company is the technology it built to power them all,” suggests Wired. “Known as PullString, it’s equal parts speech recognition engine and script writing tool, and it’s quite a departure from other speech rec tools developed by the likes of Microsoft, Google, and Apple. It’s tailored specifically to kids, whose sentence structure, pitch, and vocal tone have posed challenges for traditional tools.”

ToyTalk is hoping to license the PullString technology to other companies, which could impact more than children’s entertainment. “Speech capability is becoming a selling point not only for phones, but for video game consoles, televisions, and even refrigerators,” notes Wired.

Jacob views the technology as a new way for children to play, somewhere between the playground and an imaginary friend.

“I think at some deep level if we succeed, we’ll inspire the imagination of kids to talk about things they might not otherwise talk about,” Jacob said.

“Toytalk is most successful if going forward a whole lot of kids are talking to a whole lot of characters. I hope a bunch of those are our characters and a bunch are other people’s characters, too,” he added. “I want to see a world full of conversation.”