Sony launched First Flight, a crowdfunding platform/online store for its employees’ projects seeking outside funding. In the company’s Creative Lounge, employees and outsiders can develop pitches and construct prototype products. Some of these nascent projects have been presented to senior Sony executives, and Sony CEO Kazuo Hirai has given the Seed Acceleration Project (SAP) a relatively large amount of autonomy. Among the more developed products is the HUIS programmable universal remote.

An Engadget reporter visited the Creative Lounge to take a look at some of projects generated through First Flight and was impressed by MESH, a DIY smart project maker that raised funds through Indiegogo. “The team created a simple, clean ‘visual design’ app to combine and tie together inputs and outputs,” realized by tags.

Targeted at kids, MESH ties the tags to tabletop games or smart notification systems that ping your smartphone and is now up for preorder on Amazon in the U.S. and Sony’s First Flight. Each tag is currently priced at $50 (and up) apiece.

“It has a breezy design and simple interface. The system also reminds us of SmartThings’ smart home-centered collection of sensors and connectivity.”

The FES watch, which launched on Japanese crowdfunding site Makuake, houses an e-paper display in the watch face that stretches across the watch strap; users can cycle through 24 different combinations of watchband designs. It will run for approximately two months on a single charge, depending on how often the user cycles through designs. The screen refreshes and displays the time as the user lifts his/her wrist.

The HUIS universal, programmable remote includes an e-paper touchscreen, customizable interface that simplifies design and offers a remote “page” that switches for “everything that the HUIS connects to,” which includes fans, AC and compatible lights. Haptic feedback is another feature. The company is also working on a charging dock. 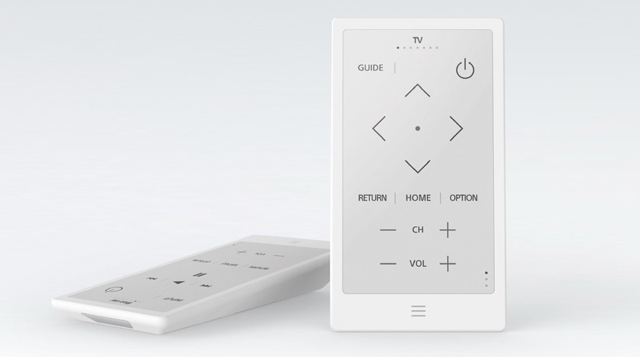 The crowdfunding, exclusively on Sony’s First Flight, has raised about $142,000 or over 17.5 million yen from early adopters who will pay about $200 for the controller.