Two “force display” devices will make their debut at the SIGGRAPH technology conference in Vancouver next month. These devices, the Traxion and the Buru-Navi3, generate vibrations that offer wearers the illusion of being pulled or pushed in a specific direction. The Buru-Navi3 uses a 40 hertz electromagnetic actuator already found in smartphones. This technology could eventually be used in navigation applications in wearables so that the user will literally be pulled in the right direction. 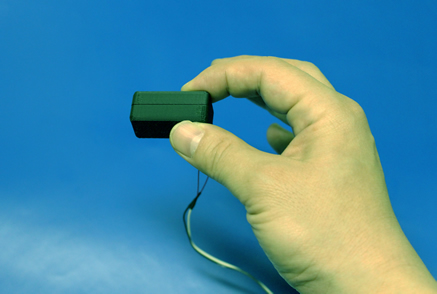 Japanese researchers Tomohiro Amemiya and Hiroaki Gomi have been working on “force illusions” since 2004.

“Amemiya discovered that when the vibration occurred asymmetrically at a frequency of 10 hertz… a distinctive pulling sensation emerged in the direction of the acceleration,” reports MIT Technology Review.

The Buru-Navi3 (pictured on right), which is about the size of a wine cork, creates a force illusion when it is pinched between the thumb and forefinger.

The Traxion works in the same way, generating an asymmetrical vibration when it is held between the fingers. Both the Traxion and the Buru-Navi3 have been able to help a blindfolded user navigate a path. However, the force illusion is much weaker when the device is only touching the skin, as it would be in a wearable device.

“We tested many users, and they said that it feels as if there’s some invisible string pulling or pushing the device,” Traxion researcher Jun Rekimoto said. “It’s a strong sensation of force.”

“This way-finding application might be a perfect fit for the smartwatches that Samsung, Google, and perhaps Apple are mobilizing to sell,” notes the article.