SeatGeek, a ticket aggregator that allows people to compare listings for concerts and sports tickets, has revamped its app and shifted its business toward resale. Their mobile app now lets people transfer tickets to their friends for free. SeatGeek takes a 15 percent cut when users list and sell their tickets. Users can both buy and transfer tickets on SeatGeek’s mobile app, unlike competitors StubHub and LiveNation, which do not offer transferring services on mobile.

SeatGeek is going up against some major ticketing giants. StubHub, for example, controls almost half of the $5 billion U.S. resale market. However, the founders are betting that the mobile experience will set them apart. “Ticketing is still a desktop thing for the most part, which is sort of strange given how naturally it lends itself to mobile,” SeatGeek founder Jack Groetzinger said in Bloomberg. 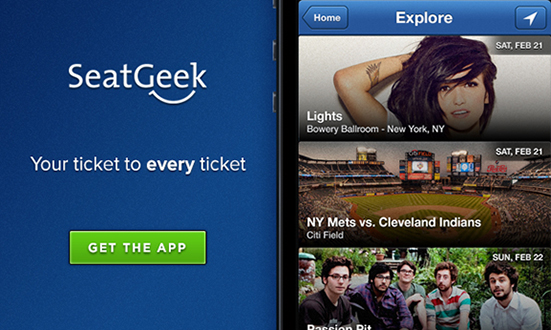 The company already does 75 percent of its daily transactions on mobile. StubHub and Ticketmaster only get 36 percent and 21 percent, respectively, of their traffic from mobile, according to Juniper Research. In the U.S., 44 percent of traffic in the event ticket industry comes from mobile.

SeatGeek still makes money from the primary sales of tickets that are aggregated on its site or app. It lists inventory from box offices that handle college sports and Broadway plays. StubHub pulled its inventory from SeatGeek last year, saying that the fees were too high compared to the number of customers.

The SeatGeek app currently has more than 4 million downloads. Each month, the website gets about 8 million unique visitors. The founders are hoping that the transferring ticket capabilities will get more people sharing the app and using it to not only buy tickets, but sell, transfer, and pull up the tickets to get scanned at the door.