SanDisk’s new high-capacity microSD card, first announced this spring, is now available from a number of retailers for $240. Touted by SanDisk as the “world’s first 200GB microSD card,” it was originally estimated to run in the $400 range. And while the current price may still surprise some consumers, the card provides transfer speeds up to 90MB per second, which is nearly double the speed of its 128GB counterpart. According to SanDisk, the read speed will allow users to transfer up to 1,200 photos between devices in a single minute. And the card can store up to 20 hours of HD video.

“Seeing as it’s a Class 10, which enables both video recording and playback, the card is presumably geared towards photographers and filmmakers who need more space than other SD cards can typically provide,” reports Digital Trends. 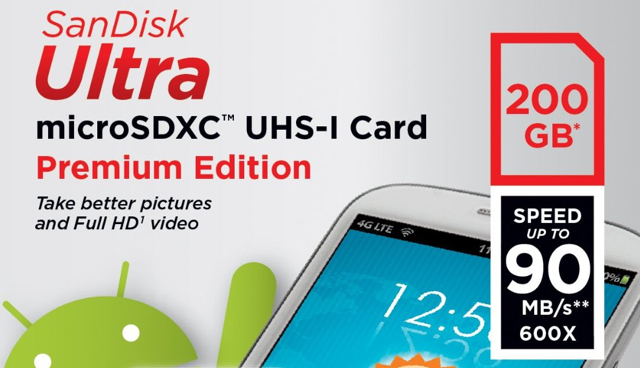 According to the specs listed on Amazon, the card includes an SD adapter for use in MIL cameras and is not negatively impacted by water, shock, magnets or X-rays. The specs indicate the card is “ideal for premium Android-based smartphones and tablets.”

SanDisk’s 200GB “card brings opulence in speed, storage, and durability that may very well justify the cost,” notes DT. “If not, the 128GB flavor of the same card retails at $79 — more bang for your buck if you’re concerned with sheer volume.”