Redbox Instant by Verizon officially launched last week, opening to the public after a three-month-long closed beta test that drummed up interest from thousands of consumers, according to Redbox Instant CEO Shawn Strickland. He said the beta test period was a great learning opportunity for the company and the service, which offers subscribers access to 4,600 subscription titles and four DVD rentals for $8 a month. 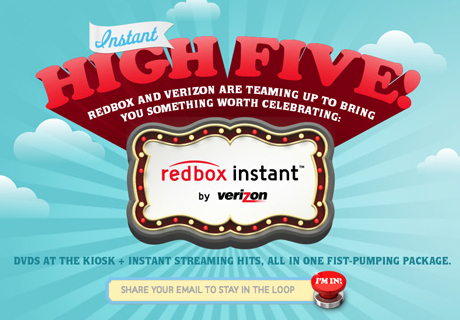 “Customers can also digitally rent or buy around 4,000 movies for a fee to augment their subscriptions with newer fare,” explains GigaOM. And so far, the model is proving successful, it adds: “Tens of thousands not only joined for a free trial, but stayed around to become paying customers after their trial period ended.”

According to Strickland, Redbox Instant customers are those who still value physical rentals. “It’s a disc plus offering,” he explains, with streaming made to supplement DVD rentals. And that’s why the company has begun with a focus on movie rentals, which Strickland said could evolve over time.

“That approach is very different from Netflix, which also started out with a movie-focused DVD service, but now invests heavily in TV content,” writes GigaOM. “Does that mean Netflix and Redbox are going to be complementary, as opposed to arch-enemies? My conversation with Strickland left me with the impression that he would be okay with that — as long as people are paying for his company’s service as well.”

“We think that the over-the-top space will evolve very similarly to the cable and network space,” he said. Consumers will likely get their digital content from a variety of streaming providers in the future, much like people get content from more than one cable network now.