Mobile carrier Telefónica is testing technology from Expect Labs that listens in on phone calls. The new type of artificial intelligence provides suggestions based on key terms in a phone conversation, by converting the conversation to text and offering instant relevant information. New investments in the San Francisco startup have been made by Telefónica, Samsung and Intel. Google Ventures invested in Expect Labs back in October. 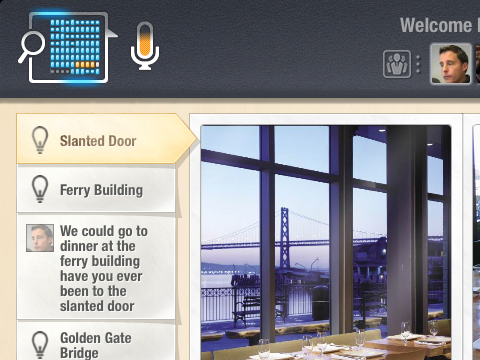 “Expect Labs has attracted attention because its technology is in line with the general direction that search technology has been taking with the advent of wearable computers such as watches and glasses, and Internet-connected cars and TVs,” reports MIT Technology Review.

“Rather than wait for users to search for something, the new technology offers up info that it thinks the user might need. The Google Now software for mobile devices, for example, already monitors its users’ locations, search history, and e-mail to call up traffic reports and other information. But Google Now doesn’t mine old-fashioned voice conversations yet.”

“Expect Labs has spent more than two years developing artificial intelligence technology that can parse the meaning of real-time conversations (Apple’s Siri, in contrast, can interpret only relatively simple spoken commands),” notes the article. “Expect Labs’s ‘anticipatory computing engine’ extracts the most relevant terms and uses them to offer potentially helpful information. For example, if two friends are having a discussion about grabbing some Thai food, it might call up reviews of nearby restaurants. If a company’s revenue comes up in a videoconference, it could display recent revenue charts.”

Expect Labs has launched an iPad app called MindMeld to demonstrate the technology. According to the company’s site: “MindMeld is a new type of intelligent conversation assistant that can actually understand what you say and automatically find related information as you talk.”

Currently in the testing phase, companies investing in the platform could use the software to improve their own technologies as soon as next year. Telefónica, for example, is looking into applications such as creating targeted advertising and a tool for customer service agents or doctors.

“Expect Labs CEO Timothy Tuttle says that electronics maker Samsung is interested in his company because, in the smartphone and smart TV market, owning and controlling software and services is becoming more important,” notes the article.