According to Tom’s Hardware, Christian Koenigsegg “joined the presentation via VR to show off his company’s latest creation, the Koenigsegg Regera hypercar.” In the demo, four robot avatars floated over a 3D grid space, and then a wireframe silhouette of the hypercar appeared, which transitioned to a fully photorealistic 50-million polygon rendering. 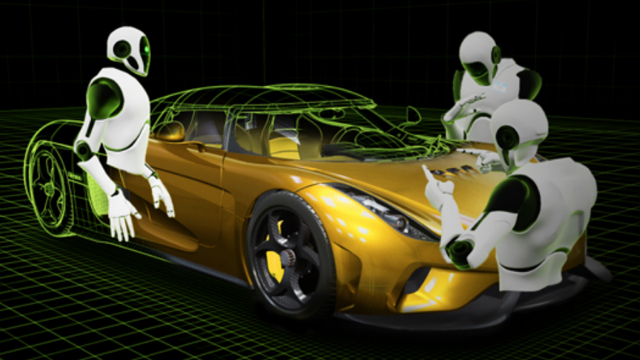 Because Project Holodeck lets users interact with VR objects — and those objects to react to human touch — Koenigsegg was able to open the virtual Regera’s driver side door and step inside to see the interior details. He then took hold of the virtual steering wheel, “to show how Nvidia leverages VR PhysX technology so that your avatar’s hands don’t pass through virtual objects.”

Project Holodeck also let the demo viewers see “an exploded view of the car,” with a “cluster of disassembled parts in an animation that played out in real-time.”

VentureBeat notes that, “the new processor for artificial intelligence applications, the Tesla V100 [also called Volta] … has 21 billion transistors … an order of magnitude more powerful than the 15-billion transistor Pascal-based processor that Nvidia announced a year ago.” The 815 square millimeter chip, about the size of an Apple Watch face, has 5,120 CUDA processing cores, performs at 7.5 FP64 teraflops and can handle 120 Tensor teraflops. Samsung manufactures it for Nvidia.