The New York Times debuted its second, and most ambitious VR film, “The Displaced,” along with its NYT VR app, which can be viewed with Google Cardboard. Produced in partnership with VR studio Vrse, the 11-minute documentary, which focuses on the daily lives of three refugee children across the world, was directed by Ben Solomon and Imraan Ismail and shown at a premiere that included a panel discussion that included participation of Vrse chief executive Chris Milk, who characterizes virtual reality as “the last medium.” 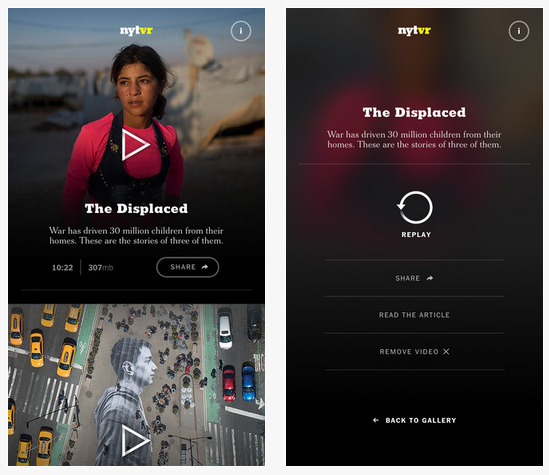 According to NYT, The Times Magazine’s production tells the tales of 11-year-old Ukrainian Oleg, 12-year-old Syrian Hana and a 9-year-old South Sudanese Chuol. “This new filmmaking technology enables an uncanny feeling of connection with people whose lives are far from our own,” says Magazine editor Jake Silverstein.

The Verge reports that the panel discussion provided a look at VR that was “alternately informative, thoughtful, bombastic, and strangely unreflective of how “The Displaced” actually takes advantage of the medium’s limits and potential.”

Shooting VR is “very raw,” says Solomon or, as Ismail puts it, “It’s not like going out and hunting with a gun. It’s more like laying traps.” Milk calls VR a “quantum shift” that “actually brings you there and places you on the ground,” ideal as an “empathy generator” that makes it more difficult to manipulate the truth.

NYT photographer Lynsey Addario, after admitting she felt “almost obsolete,” did note that photography is still powerful. VR, concluded the NYT staff, is “another tool in a large arsenal of storytelling options.”

The Verge found the NYT VR project to be “frustrating.” “As a total shift in journalism… that description puts VR forward as not just different, but massively superior, ignoring the complexities of human communication. And it downplays the powerful role older media plays in ‘The Displaced’.” The VR film, The Verge continues, is “most powerful, though, when you’ve read the more complex written story of their lives as refugees, getting context that pure immersive video can’t deliver.”