New Search Engine Gets Its Streaming Music from Live Radio

Robertson explains the technology to GigaOM saying that indexing such a large number of stations requires “a huge amount of bandwidth.” Tens of thousands of “spiders” search through the stations to determine what’s currently playing. That information then goes to a database, which is what users search through online. 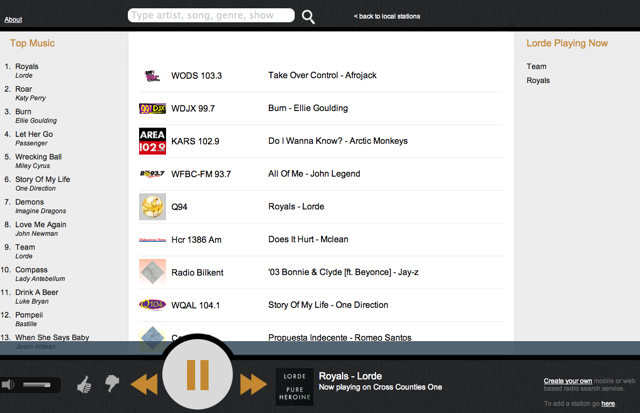 “To be honest, the result isn’t quite as fine-tuned as Pandora, and the catalog of songs is obviously a lot smaller than that of a subscription service like Spotify,” GigaOM says. But Radio Search Engine is perfect for Top 40 lovers, “and the interface actually also works pretty well to find live streams and recordings of spoken word programs like ‘This American Life.'”

The adult contemporary playlist option offers a list of the Top 20 from that genre, and once a user hits “play,” the site will put together a playlist of related songs. It is similar to Pandora in that it chooses the next song for you, but the songs are sourced from a live broadcast.

Before Radio Search Engine, Robertson launched MP3.com and then MP3Tunes.com, which shut down after being sued. He tells GigaOM he’s not worried about the same fate for the new site: “I think search engines are commonplace so for once I’m not running first and taking arrows.”

A 2-minute video on YouTube offers an Intro to Radio Search Engine.