“Being There – Virtual Reality News and Documentaries” was the title of a panel on VR journalism at the NAB Show in Las Vegas. Panelists included senior journalists from Sky, RYOT, Condition One, and USA Today Network, as well as one of Google’s lead VR evangelists. Lessons learned include the importance of proximity (e.g. close-ups), making sure that everyone on the team has experience with the key steps in the workflow so they understand the process and can fill in for others, and the need to experiment and fail. The panelists hope that post-production tools improve soon so a greater portion of their time can be spent planning and shooting stories.

VR offers a chance to retell stories that the public has become numb to, but there is the danger that over time VR could simply raise the level of numbness toward those stories. Many of the panelists believe that including a call to action in the story that gives people a means to have a direct impact on the ground is one way to combat that escalating numbness. 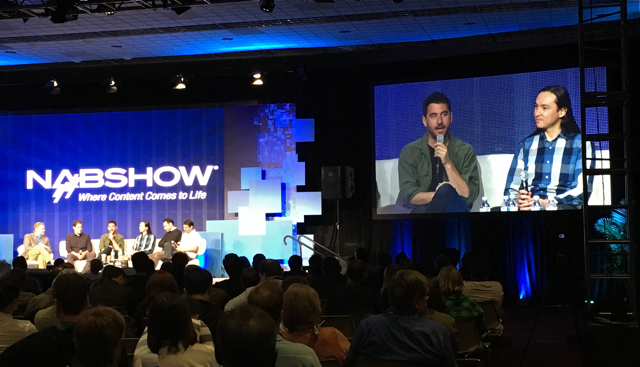 What lessons have you learned from your experience with VR journalism?

Bryn Mooser from RYOT said that everyone on the team should know how to shoot, stitch, and edit the VR content. Condition One’s Danfung Dennis noted that emotion is amplified in VR. The journalist should ask themselves if the story should be in VR, or does the story require greater emotional distance to be effectively absorbed by the audience.

Google VR’s Aaron Luber made the oft-mentioned point that we are still in the early stages of VR, so try everything and learn from trial and error. Fail fast. Niko Chauls of USA Today Network recommended that you not publish your first three VR pieces. They are great learning experiences, by may not be ready for public consumption.

Richard Nockles from Sky spoke about the importance of proximity. Getting close to your subjects is key to developing the sense of empathy and presence.

Addressing that point, Dennis announced the launch of their “Bison” camera, specifically designed for hazardous environment shooting and with close-up capabilities. The unit has 16 gen-locked cameras and 4 mics, and is optimized for shooting subjects as close as two feet away. Its cooling technology enables two hours of continuous shooting at 48fps plus internal rough image-stitching and MP4 output without overheating. The twelve-pound unit sits on a custom tripod whose legs are rendered invisible in the final spherical image.

How much does technology limit you?

Mooser said that he shoots differently depending on the platform(s) he plans to distribute the content to. Dennis added that he chooses VR cameras the way he used to choose lenses when he was a photojournalist. Different cameras have different strengths.

Luber said that technology advancements will fix the current imbalance where creatives now have to spend more time in post than in pre-production and production. Platforms, and in particular YouTube, are working to simplify the post-production process so journalists can spend a greater portion of their time planning and gathering stories. Last night Google announced that YouTube will support the end-to-end VR experience – 360 video and spatial audio – on all of the major platforms and operating systems.

Nockles said that post dominates now, but in six months we’ll just hit ‘record’ and capture without worrying about the technology or the workflow.

How do you spot a great subject for VR?

Chauls questioned the validity of the question, saying that you wouldn’t ask what makes a great newspaper story or broadcast story. It comes down to storytelling and the language of storytelling. Each media has its own language that has to be learned by professionals and the public. We take the language of cinema (ex. crop, pan, frame) for granted, but it developed over time as people learned to use the medium.

We are currently applying the language of other media to VR. We don’t yet have those words for VR, he said, and we seriously need it.

Mooser added that his journalists feel like they are at an historic moment in journalism where they are creating the language of VR journalism. It is a thrilling opportunity, he said.

What are the choices in VR journalism, and what is the role of the journalist?

Getting in the middle of the action, with tear gas canisters flying overhead in a war zone, is fantastic, said Nockles. VR is like cinema verite, added Mooser. It is a tool for showing things the way they really are.

Nockles’ dream scenario is for the journalist to wander around interviewing people. The journalist is the camera operator.

Mooser sent a student citizen-journalist, who happened to be an Islamic girl, to a Trump rally. She shot it so that we can see both the interview subject and her reaction to the subject’s comments. She then drew text onto the video, a la Snapchat, when she edited the piece.

Variety’s David Cohen summarized by saying that the journalist can be the expert guide, helping the audience navigate and understand the world – to which Chauls said that Cohen was thinking too narrowly. It is a new medium. The role of the journalist depends on the story you are trying to tell.

Dennis responded that, in many powerful situations, the journalist acts as a guide; helping the viewer feel safe in the space. He discussed a piece he did inside a slaughterhouse. It is a very disturbing piece, but it is made a little less disturbing by having the journalist accompany the viewer and talk the viewer through what they are seeing.

One challenge journalists have is conveying the scale of a story, said Mooser. VR is an excellent way to capture and convey the scale of devastation and other crisis situations. His 360 VR coverage of the Tibetan earthquake helped people understand and emotionally connect with the fact that an entire community was devastated. RYOT’s goal is to move people beyond story and to action.

Dennis added that “VR will help expand our moral community,” to other communities, other cultures, and even other species.

Injecting a note of caution into the discussion, Chauls noted that VR can retell stories that we have become numb to (ex. refugees, suicide bombers, war zones), but over time how do we avoid simply raising everyone’s level of numbness?

“I moved from photojournalism into VR because of that numbness,” responded Dennis. The answer may be providing people with action options that visibly impact events on the ground.

Mooser added that with their Tibetan coverage and their other stories, they always include information about how individuals can help. He does not believe in the classic idea that journalists should be detached and outside of the stories that they are covering.

On issues of ethics in journalism, Chauls said that at USA Today their VR teams discuss the issue a lot; what to show, what not to show, when to warn the viewer. He said the important thing is that the conversation happens, and that they explain the conversation to the audience he serves so they understand the decisions.

The panel participants posted the URLs of VR pieces that they encourage people to watch to better understand VR in journalism. To see the list, and read more of the panel discussion, visit the panel page online.