Motorola introduced its Android powered Moto X on Thursday, the first smartphone released by Motorola since Google acquired the company two years ago. The new handset features persistent notifications, user-customizable design components, instant photo-capture and hands-free authentication. The defining feature, however, is the integration of Google Now. “The Moto X is the first in a series of hardware products that Google hopes will supercharge the mother company’s software and services,” reports Wired. 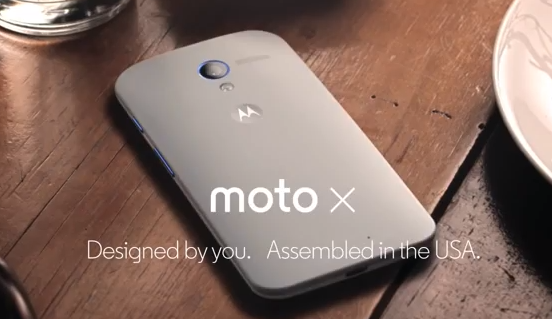 In order to streamline and develop its business, Motorola is reducing the number of its products from 45 to approximately five to six and selling in fewer countries. Also, the company has designed the Moto X for wider appeal, in contrast to Motorola’s Droid phone which targeted males with “sci-fi” features.

Motorola will be assembling the Moto X in a recently acquired Nokia factory in Texas. It has duplicated the exact manufacturing process used in China, except for a new and highly automated delivery process.

“If you look at what services are most used on smart phones, it’s obvious that they’re things like maps, mail and search — things that Google does,” says Dennis Woodside, Motorola’s new CEO and former head of Google’s domestic sales operation. “Rather than mess with that, we wanted to build a device that makes those services as easy to access as possible.”

The Moto X has two important “touchless control” features. The device is integrated with the Google Now intelligent personal assistant, with Apple Siri-like voice command functionality that responds to users saying “OK, Google Now.” Another key feature is Active Display, a low power consumption system that displays notifications without having to wake the phone.

Other key features allow users to quickly capture photos by shaking the device with their wrists to enable the camera. Battery life has been extended by using one of the eight processor cores to conserve power. It is built using techniques from the Moto ACTV, an obscure wrist-based fitness product.

Motorola will add hands-free authentication some time after the initial device launch, where users can use a special chip or wearable token within a few feet to gain access into the phone via near field communication (NFC). The company will also allow buyers to customize the phone with a wide variety of 18 colors, wood veneers, different materials for the back and other varying accents.

“Google is doubling down on its massive acquisition fee to make phones that push technology and, not incidentally, promote Android and Google services in general,” explains Wired. “Building Motorola itself into a profitable entity is not an immediate objective.”