Massachusetts Institute of Technology grad student Jinha Lee demonstrated a 3D computer interface that allows users to interact with Web pages and documents inside their computer. SpaceTop is a 3D desktop environment that combines a transparent LED display and two motion tracking cameras (one for the user’s hands and the other for his/her eyes) so that users experience the illusion that their hands are actually inside the computer.

Lee, who began development on the system while interning at Microsoft Applied Science, hopes the interface will serve as a next step in personal computing. Much like the Macintosh revolutionized the computing experience graphically, and tablets revolutionized the experience by implementing touch, Lee thinks his system can increase user interaction.

“Programming the world will alter even our daily physical activities,” Lee said at the TED conference last week. “With our two hands we’re reaching into the digital world.” 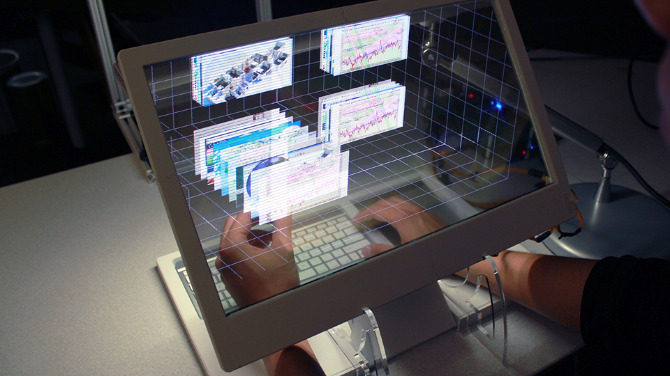 Lee knows his interface will not replace mouse-based computing for simple tasks like e-mail, but thinks it would prove useful for “collaboration, design, and potential new activities… like trying on virtual clothes,” reports Wired.

SpaceTop joins a 3D interface with 3D gesture controls, “a smart convergence that will likely become more common,” notes the article. In his TED talk, Lee described “a broader shift toward interfaces we can grab with our hands. Humans seem to prefer collaborating via physical interfaces; think of a scale model, map, or whiteboard. People also like interacting in multiple modalities; think of reading a book, underlining words and scribbling in the margins in pencil, and taking separate notes on a pad.”

When discussing the future of 3D computing, Lee said: “It shouldn’t be in the hands of scientists, it should be in the hands of normal people. It’s really important to have that eye when we think about what we want to do with this to design a beautiful world. It could be anything when the power of digital escapes the screen, but it’s really our responsibility to design this together.”