The first-ever drone-related crash of an aircraft in the U.S. may have taken place last week in South Carolina. According to two helicopter pilots, a student and an instructor, a drone appeared directly in front of them, causing the instructor to take over the controllers. The helicopter’s tail hit a tree or brush, causing the crash landing, which they reported to the South Carolina Police Department. The National Transportation Safety Board is opening an investigation, according to spokesperson Chris O’Neil.

Bloomberg reports that O’Neil stated, “the NTSB has not yet been able to independently verify that information.” Neither pilot was injured, but the Robinson Helicopter Co. R22’s tail “appeared to have significant damage.” The Federal Aviation Administration states that the helicopter crashed at approximately 2 pm, but “didn’t confirm the possible role of the drone.” The drone in the South Carolina accident appeared to be a four-rotor SZ DJI Technology Phantom, manufactured in China and “one of the most popular in the world.” 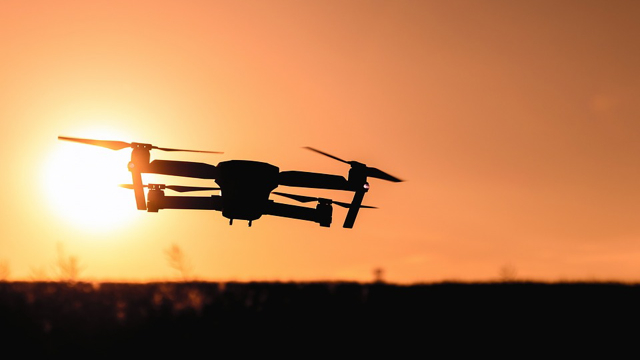 Currently, drones “are typically restricted to flights within 400 feet of the ground and within sight of the operator,” and also “are supposed to stay clear of traditional aircraft.” The FAA has received thousands of reports of “possible drone safety incidents, many involv[ing] apparent illegal flights.” An FAA study reports that, “drones would cause more damage than birds of similar size because they contain metal parts.”

Although the drone and operator were not found, “an NTSB investigator is interviewing the two people aboard the helicopter and will gather other information from possible witnesses and other sources.”

In Canada, a drone and small charter plane collided, and the FAA is investigating if “an air-tour helicopter in Hawaii clipped a drone” on February 9. Canada’s Transportation Safety Board stated that drones near airports and “within controlled airspace poses a serious risk to aviation safety.” Airlines for America, a trade group for large carriers, the Air Line Pilots Association and the National Air Traffic Controllers warned U.S. lawmakers about “the likelihood that a drone will collide with an airline aircraft is increasing.”

The only confirmed drone-related aviation accident in the U.S. occurred on September 21 above New York City, when a drone struck an Army helicopter near Staten Island, said the NTSB. The helicopter landed safely. The NTSB found that, “the drone’s operator had flown the device out of his sight and didn’t see the helicopter.” The Academy of Model Aeronautics, which represents drone hobbyists, admitted that, “some rogue flyers choose to operate in an unsafe manner despite existing drone laws.”