Internet and the Body: Growing the Fitness Wearables Market

Is the honeymoon over for fitness wearables? That’s on the mind of New York Times technology writer Eric Taub who quizzed executives in the field about what he perceives as declining interest in fitness trackers and smartwatches. TomTom president Jocelyn Vigreux countered that the industry is actually in its infancy. “We’re on a curve and the curve is steep,” he said during the CES session. “We’re at the dawn of an explosion of innovation precisely because we have so much capital and smart people invested in wearables.”

Suunto Oy senior manager of future concepts Terho Lahtinen (below right) said that many fitness wearables have been built simply because the technology allows it, but he agrees with Vigreux that the category will continue to grow. “The question of how it makes my life better hasn’t been answered yet,” he said. “The sustainable benefit isn’t there.” His company makes high-end smartwatches that “focus heavily on design.” 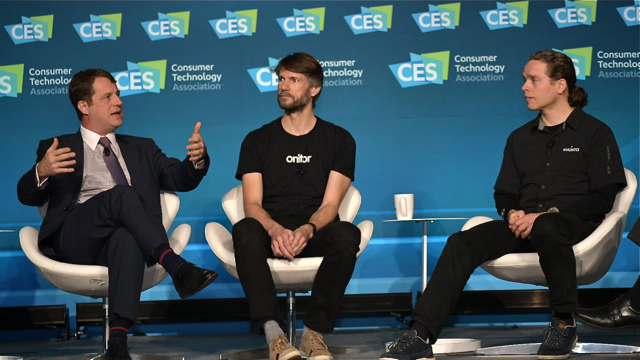 The fitness wearable industry is “teasing out utility,” opined CloudTag chief creative officer Peter Griffith (above center), whose company makes a weight loss program wearable that can be personalized. “The fascinating thing about our industry is that there are so many possibilities and genuine user need,” he said. Griffith sees the future opportunities as deploying the technology with clothing and through various partnerships.

Tractive chief executive Michael Hurnaus, whose company makes wearables for pets, reports that one of the big issues still to overcome is charging. “If you run out of battery you forget about it,” he said, referring to fitness trackers. “The better the battery gets, the more you can use it without recharging it, the better it will be.”

Since wearables have been introduced, companies have gained a treasure trove of data that is just now becoming useful. “We’ve collected data from millions of people,” said Vigreux (above left). “Now we’re in a phase of making sense of it, using it more efficiently as an industry to keep the interest of the user. That is why we’re at the cusp of a bloom of innovation.”

Griffith agrees. “When you start to put numbers on things, you can recognize patterns,” he said. “We’re using that to create a pretty rich program that takes users through what they need to do to lose weight.”

How the consumer handles the data coming from potentially multiple wearables is another issue that needs to be addressed. “It could go in a number of different ways,” suggested Griffith. “For the smart home full of IoT devices, all those devices are connected in a mesh network. Are we at the point where we need a personal mesh network to keep track of all the information? That could happen. In the future, not everything will be delivered through the screen, and the voice, the digital assistant, could be the hub.”