Intel just introduced the Xeon E5-2600 v4 chip family, which includes up to 22 calculating engines on each chip (up from a maximum of 18) and has built-in features to encrypt data more quickly, thus potentially improving security of cloud computing. Dell, HP and Cisco Systems will use the chips to make new servers. Intel also revealed its collaboration with CoreOS and Mirantis whose technologies are aimed to make it easier for companies to move data between different cloud services or their own data centers and the cloud.

The Wall Street Journal notes that Intel has “benefited from the immense numbers of servers purchased by cloud services” including Amazon, Microsoft and Google, but the company also wants to assist smaller cloud providers and companies trying to create cloud features for their own data centers. 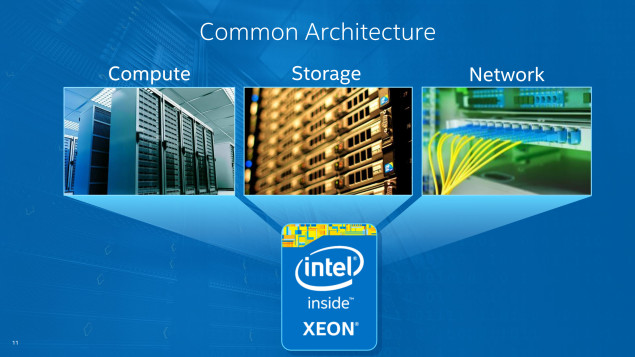 “Any business is going to use multiple clouds,” said Intel executive Diane Bryant. “The concern is, ‘please don’t lock me in.’”

That impetus is behind Intel’s recent collaboration, and underlines its efforts with two open source programs, OpenStack and Kubernetes.

OpenStack is “a kind of dashboard to control resources in a data center,” and is offered commercially by Mirantis among other companies, and is also available in a free version. Kubernetes, originally an internal project at Google that is now distributed by CoreOS, “simplifies the task of managing large numbers of containers,” which are “software wrappers for small programs that can work together.”

By collaborating with CoreOS and Mirantis, Intel aims to let companies more easily use both technologies “without maintaining a separate cluster of computers for each” as well as easily move computing between different cloud providers or between their own data centers and cloud providers. Intel and VMware, which makes data-center software, are also collaborating on “centers of excellence” to allow people to “test cloud techniques without buying new technology or moving jobs to cloud service vendors.”

Also new from Intel, in collaboration with Micron Technology, are solid-state drives (SSDs), faster data storage devices that use NAND flash memory chips. This is Intel’s first product based on chips with 3D NAND technology, which “boosts storage capacity by using many layers of circuitry rather than squeezing the size of transistors.”