Earlier this summer, we reported that Industrial Light & Magic was launching its new ILMxLAB division to develop virtual reality and augmented reality experiences for movie fans. The experimental division has now shown off three of its VR and AR proof of concept projects. In addition, ILMxLAB houses a team from Walt Disney Imagineering that’s working on futuristic Disneyland attractions. None of it would be possible without ILM’s unique blend of creative staff, cutting edge technology and years of expertise.

According to The Verge, which sent a reporter into the ILMxLAB, the projects include a VR version of the Holodeck housed on a motion capture stage with two screens angled at 90-degrees. The reporter was able to interact with C-3PO and other “Star Wars” characters and environments. 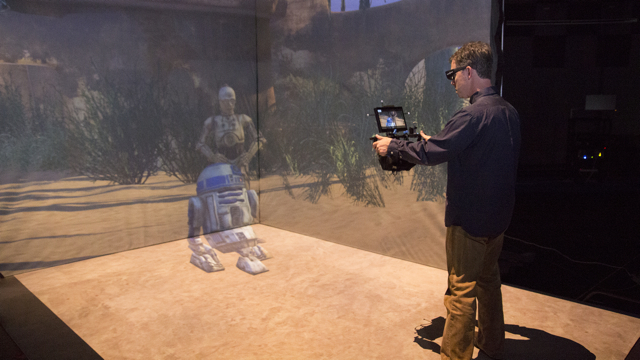 “The lab is a developmental playground for any and all kind of interactive or immersive experience,” explains The Verge. “Virtual reality, AR, theme park attractions; it’s all up for grabs… in a self-contained entertainment studio of the future.”

In charge of the ILMxLAB is Rob Bredow, formerly CTO of Sony Imageworks. Now Lucasfilm’s head of New Media and VP of its Advanced Development Group, he supervises all of the Lucasfilm assets to focus on producing “multiple types of experiences” for the “Star Wars” franchise and other films coming down the pike.

In addition to the VR Holodeck, says Bredow, other projects include an iPad augmented reality movie with C-3PO and Boba Fett and an Oculus Rift version of the film.

ILMxLAB creative director John Gaeta “sees a world where cinema becomes real-time and reactive, where audiences can virtually inhabit the worlds of their favorite characters and use them to tell their own tales.” The end product, he says, is “an interconnected universe of story experiences that let audiences immerse themselves in a world to whatever degree they want.”

The allure for a company like ILM is obvious, says The Verge: “These new media will allow ILM to repurpose the assets it creates for movies, wringing additional value out of them.”