Facebook has unveiled its Home suite of apps and home screen replacement for Android phones. Engadget reviews the new UI featured on the HTC First smartphone. Home essentially serves as a skinned version of Android OS that offers deeper Facebook integration than the social network’s normal app. It behaves as the phone’s launcher, so instead of a regular lock screen, users will see the Cover Feed, which emphasizes updates from people instead of apps.

Facebook Home emphasizes photos above all else, with large images throughout. “Photos take over the entire screen, with the profile pic situated in the lower middle. When that image is tapped, you are presented with three launch options: messages, the app drawer and the last app launched. If the status update is text-only, your friend’s cover photo is used instead,” details Engadget. 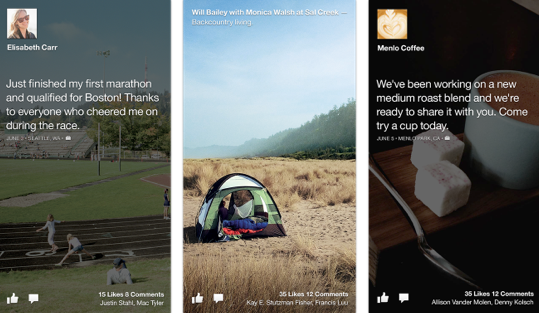 Messages pop up on the screen’s corner in bubble form, which Facebook calls “chat heads.” Users can have up to four chat heads spread anywhere across the screen; the oldest one getting bumped off-screen when a new one arrives.

The Home UI also heavily emphasizes gestures. “Notifications can be cleared out with a single long-press, chat heads can be dragged around anywhere on the screen, double-tapping a photo marks it as liked, and flipping through status updates is as easy as swiping left or right. One of Facebook’s points of focus is the fact that it’s easy to use one-handed, even on larger devices like the Note II; reps showed us a few demonstrations in which they easily performed several gestures with one thumb,” the article explains.

The review concludes that it’d be worth consideration for a heavy Facebook user to switch from a standard Android launcher to Facebook Home’s version, but since it “removes many of the functionalities we love about the Android home screen — widgets, shortcuts, folders and clocks — it’s a tough call.”