Digital Optical Tape System (DOTS) could be the answer to the film industry’s digital archiving problem. Group 47, a startup of several Hollywood technology veterans, is getting ready to build an engineering model, and hopes to have the technology available in the next 18 months. The company proposes DOTS as a robust, secure, inexpensive digital archiving format that could last more than 100 years. The plan is to further develop the technology and license it to manufacturers. 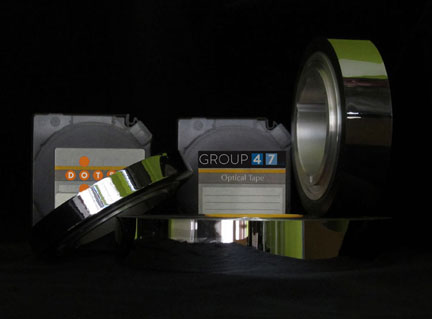 “Archiving in the digital age is considered a dilemma that might result in the loss of some of Hollywood’s movie history,” writes Carolyn Giardina for The Hollywood Reporter. “For this reason, studios continue to save their movies on film because it is the only proven archival technology that can last at least a century, according to research conducted by AMPAS’ Science and Technology Council.”

Typically, studios also save movies on digital LTO (Linear Tape-Open) tape for long-term storage. However, the LTO process requires occasional transfer of the materials to new tapes. While LTO tapes are expected to last several decades, some have identified data loss that has occurred in less than five years.

“Concern is largely centered on digitally-shot independent titles, or elements of movies, that rely solely on digital media for long-term storage,” reports Giardina. “Group 47 is proposing its DOTS technology as a digital archival format that it claims is secure, inexpensive — and could last 100-plus years.”

DOTS was originally developed by Eastman Kodak in the 1990s at a cost of more than $80 million, but was eventually abandoned in 2002, according to Rob Hummel, the CEO of Group 47. In 2010, Group 47 was founded and acquired the technology, including patents and related intellectual property.

The technology has been tested and is durable. It can withstand extreme temperatures and exposure to electrical or magnetic fields, and Group 47 claims that film recorded to DOTS can be stored at room temperature.

The archiving of film and historical material is a global issue that goes beyond the entertainment industry. “Group 47 is also working with some government agencies who are very supportive [of DOTS],” notes Hummel.

Group 47 has applied for nine patents related to DOTS. “There are two places where we greatly improved on Kodak’s design,” explains Dan Rosen, the company’s CTO. “We developed a completely new way to represent the data and write it onto the tape, and since we switched from a frequency modulation representation for the data to a visual binary representation, that gives us the option to story imagery in a file format-agnostic, visual way.”

The company’s plan is to license the DOTS technology to manufacturers, who would develop and sell it as a non-proprietary system.