The Discovery Channel has released a mobile app that features virtual reality videos from some of the channel’s most popular shows, including “Mythbusters,” “Gold Rush” and “Survivorman.” The videos can be viewed as 360-degree experiences (via moving the phone), or as VR experiences with Google Cardboard. The videos, which were made by Los Angeles VR network startup Littlstar, are also available on YouTube, Discovery’s VR website, and a dedicated channel on Samsung Gear’s virtual reality video app Milk VR.

Re/code quotes Discovery senior vp Conal Byrne saying that the network has “already shot months worth of unreleased VR content, and continues to produce new videos for the apps and sites, which are called Discovery VR.” 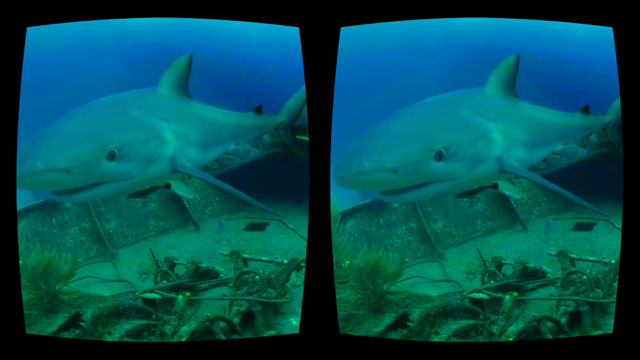 Although every show featured on Discovery VR is intended to be a VR series, Discovery has found that post production — which requires “two layers of editing” and stitching videos together — is slowing down the production process.

According to Variety, content currently includes three clips from “Mythbusters,” all filmed underwater and featuring real sharks; a surfing lesson from Discovery Digital’s Kyle Thiermann; and “Survivorman” Les Stroud explaining how to survive in the wild. Discovery plans to bring its VR content to the Oculus Rift headset soon.

The Re/code journalist discussed motion sickness, noting that the “Mythbuster” shark-diving videos were dizzying. “Personally, my most comfortable experience in the Discovery VR app (which I accessed on an iPhone 6, viewed through a Zeiss VR One headset) was the ‘Survivorman’ video, which demanded only slow, subtle head movements,” the journalist said.

Byrne distinguishes the intensity of the VR experience by the viewing platform: no headset at all is the lowest end, mobile headsets like Google Cardboard are “medium VR” and higher-end devices like the Gear VR and Oculus Rift “super VR.”

“Virtual reality has the power to immerse fans in the action, and we look forward to telling stories in this new space like never before,” he said.