A group of Sony engineers have launched a platform called MESH (Make, Experience and Share) that allows people to create “smart projects” with the simplicity of a tablet and small wireless tags. The MESH group presented its DIY kit at CES this week alongside other startups in Eureka Park. The platform uses four Bluetooth-enabled devices that can be programmed using a simple drag-and-drop system on a tablet to remotely water plants, activate lights and sound, and handle a variety of creative applications.

The MESH engineers have launched an Indiegogo campaign to fund the project. The MESH programming software is user-friendly and designed to ignite creativity. Takehiro Hagiwara, the lead engineer behind MESH, hopes the project will draw “an open exchange of knowledge and applications” supported by creative users, reports The Wall Street Journal. 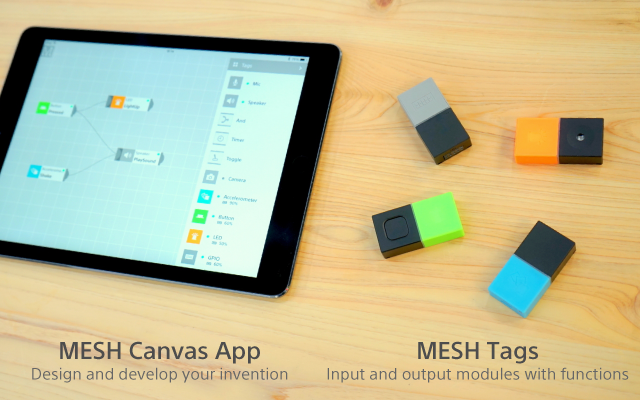 “Our first target is people who have always been interested in engineering, but don’t have all the skills. With MESH, all they need is an imagination,” said Hagiwara.

The MESH project is part of a Sony initiative to encourage entrepreneurial spirit under a new business creation section. “For Sony, the ‘intrapreneurship’ effort is a way to reinforce its DNA as a company committed to bringing innovation to the world,” notes WSJ.

Although affiliated with Sony, the MESH project qualifies as a startup at CES because of its semi-independent status. If and when the platform goes public, Hagiwara has expressed the possibility of exploring alternative options aside from Sony to launch the product.

Kazuo Hirai, chief exec of Sony, supports the approach. “Doing everything at Sony alone is an old idea,” he said. “In a rapidly changing world, we need to be dynamic, to be open to external critiques or even funding.”