At CES 2018 this week, Toyota will be showcasing its prototype autonomous vehicle, Platform 3.0, which is built on a Lexus LS 600hL. The car isn’t ready for purchase yet, but it does a good job of demonstrating what the Toyota Research Institute has been up to. Toyota has integrated many if not all of the sensors into the car’s body, creating a rather sleek design that it calls “intelligent minimalism.” The rooftop panel, sensors on the side of the car and even the trunk, for example, are part of a smooth, aerodynamic design.

Mashable reports that this design compares with other autonomous vehicles whose sensors look like “awkward, bolted on piece[s] of equipment.” The Toyota “packaged the sophisticated (and bulky) automated vehicle components into the rear compartment,” a “hexagonal box is covered with LED lights, and glows.” 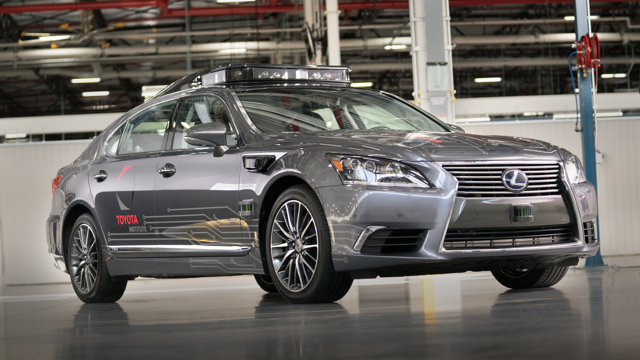 In its press release, Toyota says it will manufacture more Platform 3.0 prototypes, based on stock Lexus LS cars, this spring, “at their Prototype Development Center R&D headquarters in Michigan.” The company has not yet released a “timetable for consumer testing of the vehicle on public roads,” but notes that, “two different test models and ‘three major updates’ have occurred in the last year.”

According to Dr. Gill Pratt, Toyota Research Institute chief executive/Toyota Motor Corp. fellow, the new research platform was based on three principles: “Elevate perception capabilities to be an industry pacesetter among automated vehicles; Blend the sensing equipment into the vehicle design with a distinct appearance that is sleek and elegant; Package the automated vehicle technology in a manner that is easy to reproduce for building a fleet at scale.”

The car will be on display at Toyota’s Booth #6906 in the LVCC North Hall.