Will the flexible smartphone screen change the face of mobile phone design in 2013 and mark the biggest change since the introduction of the touchscreen? Rumors suggest manufacturing rivals Samsung and LG are working on it. Speculation regarding flexible display development dates back to 2002, and in the last six years we’ve seen some interesting prototypes and low volume products at CES featuring E-ink and Electronic Paper Display technologies. To address slow response times (especially with video) and challenges with handling color, flexible OLED displays emerged. 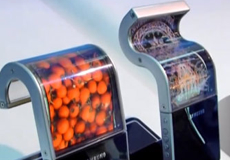 The OLED displays are thin, light, flexible and do not require a glass covering. However, the plastic can be scratched and does not respond to finger controls like glass. Corning then introduced its durable, flexible Willow Glass, designed for non-rigid OLED displays.

According to Digital Trends, Samsung will most likely be the first to introduce a flexible display phone in 2013. The company’s 2011 Galaxy Skin concept phone featured a flexible display wrapped around a cylinder for storage. There’s a chance we’ll see Samsung’s update at CES, although rumors hint at recent problems with manufacturing. LG is said to also be moving forward with flexible OLED tech, with plans to go into production after next summer.

“Smartphone design has stagnated over the past few years, but twisty screens could mean a resurgence in creativity when it comes to how they’re used,” notes the post. “No longer will the rectangular screen be standard, as screens could curve all the way round the chassis — creating a true edge-to-edge display — as well as providing yet more opportunity for different control methods.”

UBI Research anticipates 20 million flexible AMOLED panels to ship in 2013, increasing to 120 million by 2015. UBI says revenue from the panels will reach $1.2 billion.