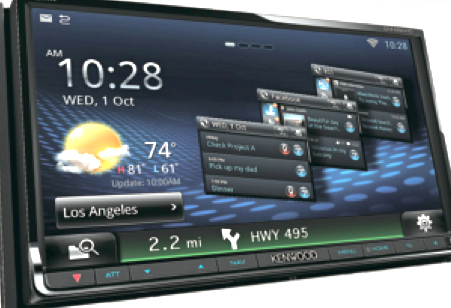 “As an entertainment device, the DNN990HD can perform a cross-platform media search for audio and video content stored on a Wi-Fi-connected smartphone or connected mass storage device as well as network search for content through the built-in streaming audio apps,” explains the press release.

The device connects to its own dedicated server and includes an external 7-inch touchscreen monitor/controller and DVD player. It also includes dual USB ports and dual camera inputs for optional front and rear view cameras.

Unlike other systems that run applications entirely on a connected smartphone or tablet, the Excelon has select apps built specifically for its Android OS. So far, only select apps will run on the system, but Kenwood is working to bring more by the March launch — including a Spotify app.

The technology was actually debuted two years ago at CES, but the connections were too complicated to be taken to production until now. The device is expected to cost $1,100 to $1,700. To see a demonstration, visit Kenwood in the North Hall at booth #1801.