BookVibe, created by startup Parakweet, analyzes the tweets of a user’s Twitter followers, and creates book recommendations based on mentioned books. The company uses artificial intelligence technologies to differentiate between a tweet with genuine regards to a book and a tweet that only mentions it. Parakweet is also developing tools for publishers and media companies for more advanced analysis on social media of books and movies. 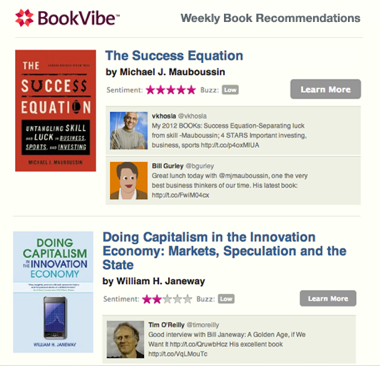 “Extracting real meaning from the shorthand found in 140-word tweets can be a challenge for humans, let alone computers,” explains The New York Times. “Some books popped up on the recommended list because their author had mentioned them. Some reviews were missed because the Twitter user offered a link to an external review without summarizing it in the tweet.”

BookVibe is a worthwhile single-purpose tool and a hint of what is possible as social media search technology becomes more sophisticated, reports NYT. A new feature was released last week, and BookVibe can now display Twitter posts on 500,000 book titles.

Ramesh Haridas, co-founder and chief executive of Parakweet, said that his company wanted to determine the types of posts in social media that had staying power and would be worth cataloging.

“We decided that the most useful ones were updates about activities,” he said. “The quality of these updates was very, very good, especially movies and books.”

BookVibe will later be released on Facebook, and Parakweet will offer more advanced tools to book publishers, authors and retailers to assist them in finding out how books are selling, what is being said about specific books and where. Parakweet has also developed a recommendation system for movies called Trendfinder.

The focus on a few topics by Parakweet can offer more sophisticated results than those from general purpose search tools from Twitter and Facebook. “It’s very hard to be an all-purpose social media tool and provide actionable analytics,” says Haridas.