BI Intelligence reviewed year-end data to identify anticipated trends in the mobile industry for the upcoming year. Research analyst Alex Cocotas published a slide deck for “The Year Ahead in Mobile,” which notes that more than 2.5 billion people were online by the end of 2012 (about 35 percent of the global population). Mobile currently accounts for 15 percent of worldwide Internet traffic, and is expected to top 25 percent by the end of 2013.

Tablet growth is also anticipated for 2013 with lower prices leading to increased sales. 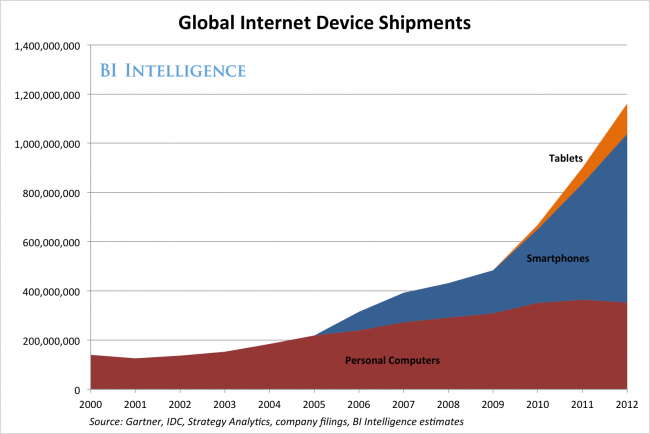 “In 2013, the mobile growth story will shift to the developing world,” notes the report. And since China currently has the world’s largest smartphone market, where Android is leading the platform race, this may prove bad news for Apple unless the company comes up with a more cost-effective alternative to its iPhone.

“The shift to low-end emerging markets is crucial because technology adoption growth slows after hitting the 50 percent penetration tipping point,” explains the report, adding that “under-penetrated segments are older and less wealthy.” (The U.S. has already passed the tipping point, as have the largest European markets.)

Therefore, in developed countries, the focus will shift to monetizing existing users through mobile apps and services. Games, social networking and entertainment are currently the leading categories for mobile consumers. However, while gaming is the biggest revenue generator in mobile, app revenues are surprisingly small overall. “Four billion dollars across over 800,000 apps is significant, but won’t create the next generation of Internet giants,” suggests Business Insider.

The report additionally indicates that mobile advertising will skyrocket, but has so far been slowed by small screen sizes, a confusing ecosystem and fractured market. Currently, the majority of mobile ad spending still involves search.

The bottom line: 1) “Tablet sales make a huge leap this year, driven by falling prices and the growth of mini-tablets;” 2) “Smartphone growth slows in the West with huge consequences for platform operators, handset manufacturers, and, eventually app developers;” 3) “Mobile apps have yet to effectively monetize a huge user base and will refocus on monetization strategies;” 4) “Mobile advertising needs to consolidate and streamline if smaller mobile properties are to rely on it.”