At CES 2018, Attendees Can Hail a Lyft/Aptiv Autonomous Car

At CES 2018, Lyft and Aptiv, a self-driving software company, will offer rides to show attendees in its automated ride hailing service (with a safety driver in the front seat). The goal, say the two companies, is to “accelerate the availability of automated driving platforms for commercial applications,” by operating in a complex environment such as the Las Vegas metro area. Aptiv is a subsidiary of Delphi Automotive, which split into two companies to emphasize its capabilities in self-driving technologies.

Bloomberg reports that Lyft and Uber “see autonomous vehicles as pivotal to their longer-term business prospects.” Lyft, which provides almost 1 million rides per day, plans to streamline how developers and car manufacturers are able to “plug into its network.” 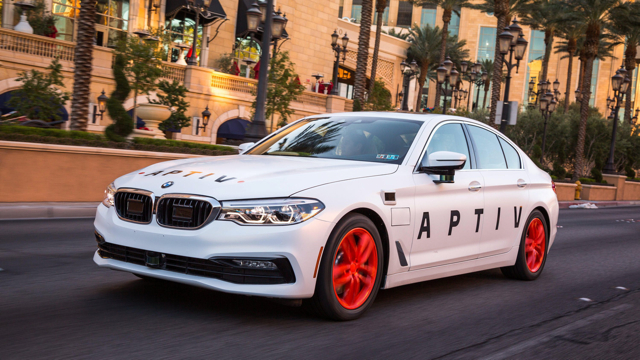 Delphi jumpstarted Aptiv with the $450 million purchase of self-driving startup NuTonomy, which “already counts Lyft among its partners and has previously teamed up with major automakers including Jaguar Land Rover and Peugeot.” Lyft also operates a Palo Alto-based development center, dubbed Level 5, devoted to self-driving vehicles.

CNET adds that the Lyft/Aptiv partnership will drive attendees around Vegas in self-driving BMW 5 series vehicles. Last year, the cars were “limited to a single 6.3-mile loop,” but this year, the vehicles “will take drivers to more than 20 destinations between Jan. 9 and 12.” Attendees will be able to request a ride at the Las Vegas Convention Center, after “walking through an exhibit explaining the benefits of driverless cars.”

In addition to the safety driver, the cars will contain “an in-car host sitting shotgun, who will no doubt regale you with tales of self-driving cars as you cruise down Las Vegas Blvd.”

Aptiv, which says, “nearly all the tech it needs hidden away under the [car’s] sheet metal,” plans to scale for production next year. Waymo also plans to run public trials in Phoenix this year.