At CES 2018, LG Display will show off its new 88-inch 8K OLED display, which now tops the previously largest and highest resolution OLED display, which was 77-inches and 4K. Much of the compelling technology at CES will be TV-related; such technologies as 4K, curved and bendable TVs, OLED, HDR and 4K Ultra HD Blu-ray Disc players have previously debuted at the consumer electronics confab. At CES 2018, 8K TVs will arrive in earnest, as well as evidence of trends such as voice control and premium HDR for LED TVs.

Engadget reports that CES 2018 will show large-screen TVs from “LG Electronics, Sony and Panasonic,” which “all source their large OLED panels from LG Display,” which is now “the sole large-size OLED display maker in the world” since Samsung Display shifted to QLED TV. LG has ramped up OLED production capabilities, including building its first plant outside Korea, in China, and is making “a bigger push into mobile OLED panels,” which is “a market dominated by its Samsung counterpart.” 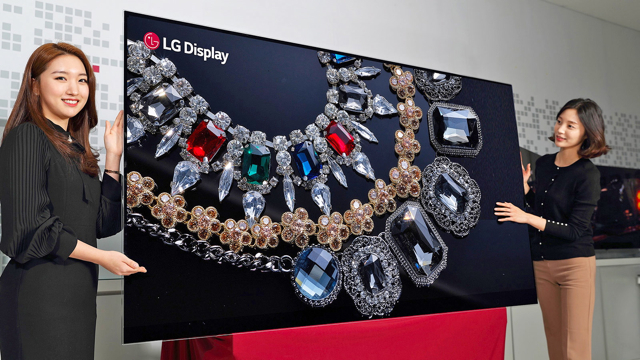 Digital Trends reports that CES 2018 will showcase many new TV-related trends, including LG Displays’ 8K OLED TV, which features 33 million OLED pixels. The new set’s resolution will be 7680 x 4320, “which is 16 times more pixels than 1080p and four times that of today’s 4K TVs.” Each of those pixels will be “capable of perfect black levels,” resulting in “impressive HDR results.” With no 8K content yet for consumer viewing, the LG Display will also upscale 1080p and 4K Ultra HD to 8K.

Other TV trends in 2018 will be “1080p panels used only in the most bottom-of-the-barrel models,” even though “4K resolution doesn’t do much for you below the 55-inch mark.” In 2018, in other words, 4K will become the standard resolution, and “manufacturers will look to premium HDR performance along with peak brightness and black levels in order to make their LED TVs stand out.”

HDR is also important for LED sets because, as OLED TVs get cheaper, the “reasons to buy LED instead of OLED are rapidly dwindling.”

There’s a chance we might see Samsung debut a prototype display based on microLED technology, which it introduced “within the context of a massive, modular cinema display earlier this year.” Apple, by purchasing microLED company LuxVue, may also “skip OLED and go directly to microLED.”

At CES 2018 we’ll also see “all kinds of new voice control tricks” to control the TV, as voice control replaces the remote control. Google Assistant and Amazon Alexa will also make a strong showing in TV voice control. “The TV was always going to become the real hub of the smart home of the future; now we’re going to see it in action,” notes DT.

In 2018, China-based TCL, which debuted a 55-inch P-Series 4K HDR Roku TV, will likely “double or triple down on that success.” TV manufacturers haven’t had time yet to integrate HDMI 2.1, which enables 4K at 120Hz or 8K at 60Hz, but “crazier things have happened.”