Amazon is adding numerous brands to its Dash push-button feature, which enables users to order products by pushing a button. The company suggests consumers keep the Dash button near the relevant product; a button to order Tide detergent would most likely be kept by the washing machine. When the buttons rolled out in spring last year, at least some people thought it was an April’s Fool’s joke. Now one recent study reveals that, a majority of the consumers that purchased a Dash button aren’t using it.

The Wall Street Journal reports that Slice Intelligence, a market research company that uses emailed consumer receipts for its studies, estimates that “fewer than half” of the people who bought a button since March 2015 have used it to place an order. Those who are using a button to order products are only making purchases every two months. 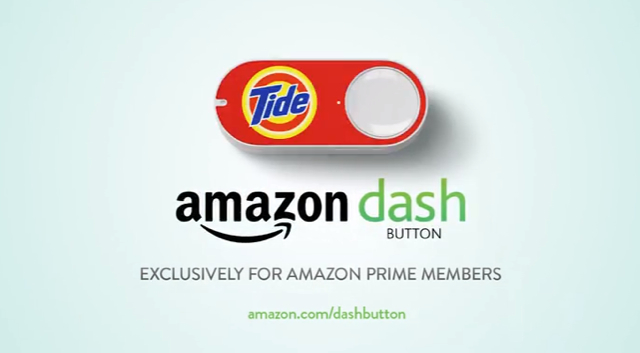 One consumer who initially bought buttons for Tide, Gatorade and Greenies dog treats now only uses the Tide button. She jettisoned the Gatorade button when “the price of a 12-pack jumped from $9 from the first purchase to $22 for the second.” “If I have to check on the price every time,” she said, “it’s not actually saving me time.”

Executives of several brands with buttons says they’ve jumped on the bandwagon “largely to ensure their brands maintain close ties to Amazon.” Seventh Generation executive Ken McFarland notes that the Dash buttons “may not be the most intuitive feature,” but his company wants “to be out there if it does happen to be a hit.”

He added that Dash buttons work better for products such as laundry detergent that “require replenishment on an unpredictable schedule” versus those, such as diapers, that consumers buy at “regular intervals,” making a subscription service a better fit. That’s Sun Products experience with its Dash buttons for All and Wisk laundry detergents and Snuggle fabric softener, which, says the company, has “exceeded expectations.”

Procter & Gamble, Kimberly-Clark and PepsiCo were early Dash brands, which paid a $200,000 buy-in fee. That fee is now waived, but companies pay $15 to Amazon for each sale via button and 15 percent of each Dash product sales plus a commission of 8 percent to 15 percent. Only Amazon Prime members can use Dash buttons, for $5 per button, but Amazon also offers a $5 rebate for the first purchase for every button.

Amazon’s Dash button compete with its own Echo and Tap virtual assistants, as well as Kwik Commerce, which is introducing its own buttons, for Huggies diapers and Anheuser-Busch InBev beverages. Kwik also has a deal to distribute Domino’s Pizza in Israel.