“Microsoft’s new Windows 8 operating system is a combination of two very different user interfaces, with each best used in a different way,” suggests Walt Mossberg. The entire system is touch-based, but only the start screen is fully optimized for touch, while the second interface, the Windows desktop, is best operated with a physical keyboard and mouse or touch pad. 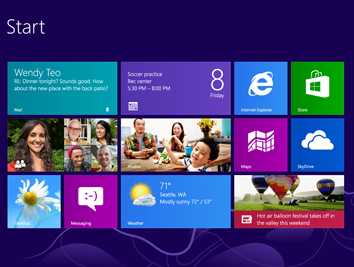 Since the release of Windows 8, PC makers have been looking to create devices to accommodate this with laptop/tablet hybrids that embrace all the new features. In his Wall Street Journal Personal Technology column, Mossberg describes the pros and cons of three laptops that have this goal in mind.

First, the HP Envy x2 “takes the simplest approach of the three, and is the only one that allows you to use a normal, thin, tablet, separate from the keyboard and touch pad. It’s also the least expensive of the three, at $850; and scored the best battery life in my tests,” according to the review.

But it’s not a perfect device. “The biggest downside of the Envy x2 is that it uses a relatively wimpy Intel Atom processor, which hasn’t powered many popular tablets,” notes Mossberg.

Next up, the Asus Taichi 21. “It has two 11.6-inch screens: a nontouch display in the usual position inside the lid and a tablet-like touch screen on the outside. The way it works is that you press a special button that controls how the two screens work. There’s a notebook mode, in which the inner screen is the focus, just like a traditional laptop, but the outer screen comes on when you close the lid. There’s a tablet mode, which reverses the priority.”

Last to be reviewed was the Toshiba’s Satellite U925t, which has a sliding screen that allows you to “push the screen back into a flat position and then slide it toward you over the keyboard, and voilà! You now have a big, bulky, 3.35-pound tablet with a 12.5-inch screen.” It is likely too bulky and heavy for mass appeal, according to Mossberg.

The bottom line: “None of these three convertibles is optimal and different people will have different tastes. But as someone who values tablets partly for their sleekness, I’d pick the HP, which includes a real tablet, if I had to choose. I only wish that, as a laptop, it had more storage and a snappier processor.”