New 3D printing technology can offer a second chance at life for toys “unfairly granted a short run in the stores,” writes Wired. An example of this is toy designer Wayne Losey’s vision of action figures to be assembled with various parts and pieces. While working at Hasbro, Losey attempted to sell these sorts of figures, but each was unsuccessful on the market. 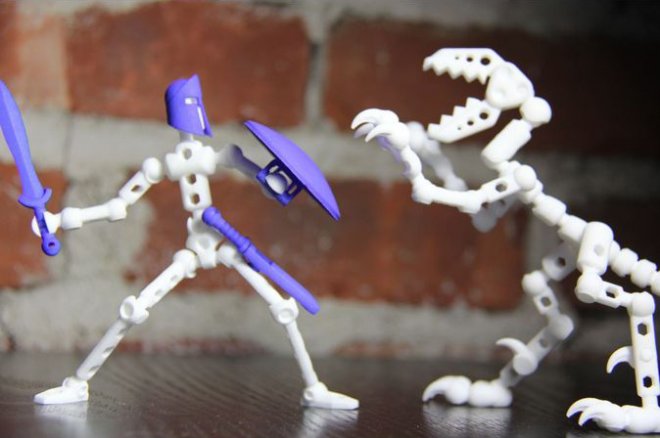 With 3D printing, he’s created ModiBots, a rethinking of his previous attempts at poseable, moldable action figures in which body parts could be assembled to create a variety of characters.

“ModiBots are a creative framework for creating poseable characters, but it’s meant to be built upon like a skeleton,” said Losey. “We also want to put the ability to create ‘content’ into a user’s hands. ModiBot is ultimately a tool for that.”

“We’re providing a bunch of parts that you can assemble in a variety of different ways (dinosaur, spider, robot, human) or build onto it to bring your own fun characters to life,” he added. “If we were comparing to Lego, Stikfas might be more like Bionicle, more about character and aesthetic, while ModiBot would be closer to Technics which is about both play and function.”

The ModiBot project consists of a line of 700 parts. The 3D printed figures cost just $15 through Shapeways.

For a person who has made toys that didn’t sell well before, Losey views the 3D printing toy model as one that’s sustainable.

“It takes me 10 days to get one of my models from Shapeways, the same as any who buys it.” said Losey. “It feels slow because we are used to walking in and buying it, but those resources are spent and many times spent inefficiently on products that don’t take off. With zero inventory and a 10-day wait, this approach will do well for a certain niche consumer who wants unique, rare or personalized products.”

The Wired post includes a 3-minute video that illustrates the ModiBot Figure Kit in action.