At CES in recent years, wearables were a surprise hit, with sophisticated fitness bands, fashion-forward bracelets and necklaces, smart fabric and watches. At CES 2018, at the Sands, about 50 manufacturers held court in the Wearables Marketplace, that featured wearables both tried-and-true and somewhat new. If nothing seemed to catch fire, it’s a reflection of what the 2018 CTA Consumer Tech Industry Forecast already revealed: wearables are flat, with a mere 1 percent growth in revenues over the last year.

The CTA forecast, however, also pointed out that, “sales of wearables units were up 4 percent to 49.3 million units.” Somebody’s still buying wearables and CES 2018 showed what some of the trends are.

First, wearables have grown beyond fitness bands and watches. MEGAComfort, for example, showed its Energysole “anti-fatigue insoles and orthotics” that combine sensors and a “patented dual layer memory foam insole.” SKIIN, a Myant company, integrates technology into everyday apparel, and Tractive Pet Wearables is aimed at GPS trackers for dogs and cats. 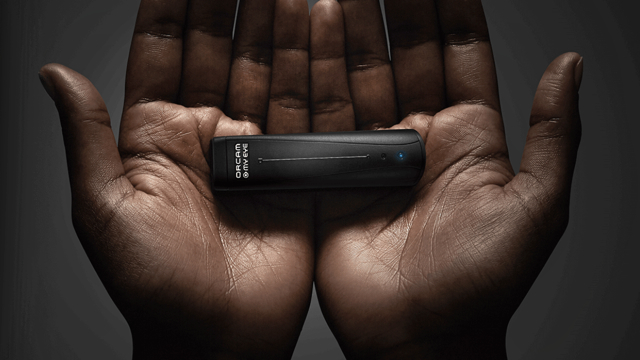 There was also technology designed for those who are blind or visually impaired. OrCam MyEye 2.0 (pictured above) “uses innovative artificial vision packed into a tiny device to provide independence to people who are blind, partially sighted or have difficulty reading.”

Wareable had its list of best CES 2018 wearables, which included the much-touted L’Oreal UV Sense patch that tracks the amount of UV the wearer is exposed to. Samsung Relúmĭno glasses combine the power from the smartphone with processor-packed eyewear to help partially sighted people read a book or view an object. It also liked the Mars Translation earbuds that makes it easier to have a conversation in two languages (English, Korean, Chinese and Japanese are the languages offered).

Both Wareable and Ars Technica favored the Garmin Forerunner 645 Music, a Garmin smartwatch with music support. There are also a couple of hearables — Bragi Project Ears and Nuheara IQbuds — that make adjustments for the hearing impaired.

Both fashion label Kate Spade and watchmaker Skagen showed off Android Wear watches, the Kate Spade New York Scallop and Skagen Falster. But The New York Times wondered, in the wake of CES 2018, if “the Fashion Wearables love affair is over.” “Only three years ago … wearables were the buzzword of the runways, predicted to trend in closets everywhere,” it said. “Now they barely merit a mention.”

The love affair has cooled, says NYT, and the problem is that many of its manufacturers aren’t really sure what they’re about. The journalist recalls being shown the first Apple Watch and asking what it would do. “[Apple chief design officer] Jonathan Ive … told me they didn’t really know; that they would have to see how people used it to understand what it would really become.”