President Obama’s appearance on Zach Galifianakis’s Web series “Between Two Ferns” has sparked some controversy. Obama’s plan was to inform young adults about the Affordable Care Act. The video received over 3 million views within the first few hours after going live, and HealthCare.gov generated a 40 percent increase in visitors. However, some are unimpressed by the president’s appearance on unconventional media, and believe he should spend his time doing more important things.

Within hours of Obama’s appearance “on the Funny or Die website Tuesday, the video of their mock interview had become the number one driver of traffic to HealthCare.gov, and the potentially risky venture into pop cultural irony is being hailed as a success by White House aides,” notes The Hollywood Reporter. 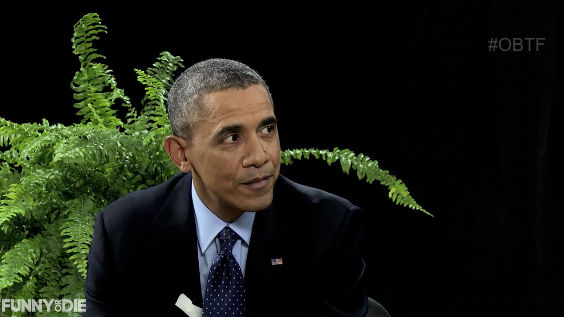 “We have to find ways to break through [to younger Americans],” said Dan Pfeiffer, presidential communications strategist. “This is essentially an extension of the code we have been trying to crack for seven years now.”

Supporters of Obama’s use of unconventional media understand that it is the President’s duty to educate citizens about regulations and laws. In this case, it seems that using Funny or Die may be a productive way for him to do this in today’s world.

“However successful, the gambit came under immediate fire from conservatives,” notes THR. “One of the president’s harshest critics in the House, Texas congressman Randy Weber, who previously has called Obama ‘a socialistic dictator,’ tweeted that the president had demeaned his office and should spend his time investigating the Benghazi attacks or fixing the ‘failed’ Affordable Care Act.”

President Obama’s “Between Two Ferns” appearance debuted on the same day as Joe McGinniss’ obituary. McGinniss is best known as the author of The Selling of the President 1968, which examines how President Richard Nixon’s savvy media techniques helped him win the presidential election.

“It has all become entertainment,” McGinniss told The New York Times in 2010. “In the 21st century, politics is just another branch of the entertainment industry.”

“That was the logical end of what he’d described in his Nixon book, of course, and it also describes Obama’s melding of political salesmanship and celebrity humor,” reports The Atlantic. “But The Selling of the President is a cautionary tale, too. Nixon’s team sold him to the American people, twice. So did Obama’s team. No, there’s no reason to expect the current president to leave office in Watergate-style disgrace, but Nixon’s story is a reminder that slick media-messaging can only boost a president so far.”