Researchers at Nvidia have found a trick that solves the problem of users being able to see the pixels in their VR headsets. By using a “cascaded display” involving two LCD panels, the researchers found that they could quadruple the pixel density of the headset, making pixels invisible to the eye even at close range. The cascaded displays also have a faster frame rate, making images appear smoother, and a reduced brightness, which is not a concern for the displays in VR headsets.

The cascaded display works by utilizing two LCD panels and the tiny shutters on the panels that control the visibility of each pixel. The shutters from one LCD panel are removed and placed over the shutters of another panel. The extra layer of shutters is installed in an offset position, effectively turning each pixel into four. 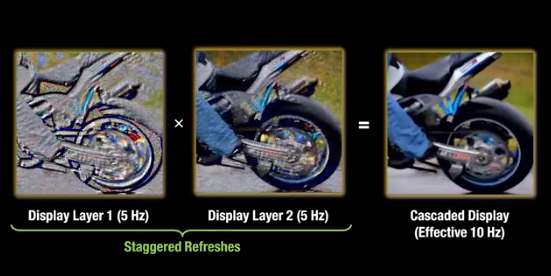 Because light has to pass through an extra layer of shutters, the display is dimmer than current VR displays. However, because VR headsets are so close to the user’s face and provide a dark space for the display, the reduced brightness is not much of a problem.

Nvidia researchers also developed new software to go along with the displays. The software can translate a feed from a video or game so that the image would be correctly transmitted through two layers of shutters. Also, the software calculates each shutter’s movements to account for the upper layer’s ability to control four pixels.

“Displays with greater pixel density could make it possible to cram more pixels into a headset so that when spread across a wide field of view by lenses — as in the design of Oculus Rift — they remain relatively densely packed,” reports MIT Technology Review.